LIVONIA – The Chip Holt Nature Center is opening a technology training session to turn the public into scientists’ greatest ally in fighting the spread of invasive species.

According to a press release from the Chip Holt Nature Center, the iMapInvasiveSpecies app allows anyone who sees invasive species to post species’ location data.

Then, authorities can see the ‘big picture’ of invasive species’ spread across the state and plan control efforts accordingly.

Some aquatic invasive species, like blue-green algae, are well-documented on Conesus Lake. Preventing the spread of others, like hydrilla, is a top priority.

On land, emerald ash borer is well documented. Preventing its spread and the spread of hemlock wooly adelgid are top priorities.

The training session for the public to learn how to download and use the app is Tuesday, April 3 at 6 p.m. The Nature Center, located in Vitale Park, asks that anyone interested RSVP by March 21 at info@conesuslake.org or (585)721-6170. 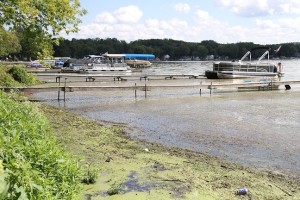 A 2014 bloom of green algae in Conesus lake. (Photo/Conrad Baker)