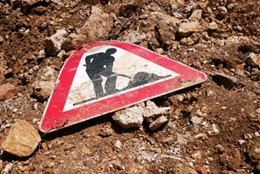 An asphalt worker wearing a chartreuse reflector workshirt and holding a red flag was struck by a brown SUV on Rochester Rd. near Sweetners Plus on Thursday, Aug. 4, at about noon. The worker was airlifted to Strong Hospital with significant injuries.

The driver of the car, an elderly man, was not hurt; but there was significant damage to his vehicle from the impact. He reportedly had plowed through some cones before striking the construction worker.

Rochester Rd. was closed down for several hours between Five Star Bank and the main intersection in Lakeville, as police investigated. Neither the man hit nor the driver of the SUV was identified on Thursday,