LIVINGSTON COUNTY – The Lakeville woman arrested for embezzling more than $50,000, possibly more, pled guilty on Tuesday and agreed to pay back the full amount to Onjax Real Estate Technologies.

Kristy Peffers, 39, pled guilty to felony Grand Larceny in the Second Degree. She agreed that the amount stolen from her former employer, Onjax, was over $50,000, but a restitution hearing will determine the exact amount, which could be over $125,000. She will serve no time in jail.

“We would like to extend our appreciation to the court and the People,” said Peffers’ attorney, Kevin Van Allen. “The underlying circumstances in this case are very, very complex. My client has taken this case very seriously and has shown appropriate remorse. It has been a lengthy process and the court has given my client the opportunity to enter into this resolution and get on with her life.”

Peffers admitted that she stole the money from Onjax from February 2013 to August 2016. At the time of her arrest in August 2016, the Livingston County Sheriff’s Office alleged that Peffers had used the company’s credit card to pay off her personal credit card bills more than 100 times over the past 3 years.

It will be critical for Peffers to pay the stolen money back as set forth in an upcoming restitution hearing.

“If this case goes forward as stated, restitution becomes a big issue in this case,” Judge Robert Wiggins warned Peffers. “Up to $125,000 must be paid within one year. If there is a balance, that would be due within the second year.”

Van Allen asked that Peffers be released on her own recognizance, with no bail required, pending sentencing, saying that Peffers has already provided $32,000 to be turned over to Onjax along with her $10,000 bail, which would be also go to Onjax if she were released.

District Attorney Greg McCaffrey did not oppose her release.

“She’s made each and every court appearance,” said McCaffrey. “If she flees, she’s going to state prison. I have no opposition with her being released to help pay restitution.” 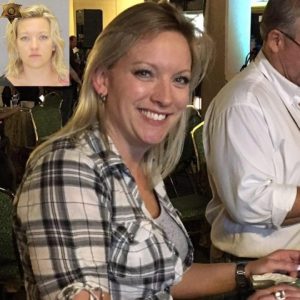