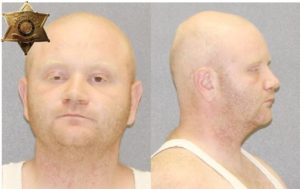 LIVONIA – The Livingston County Sheriff’s Office arrested a Livonia resident on felony charges after allegedly biting a woman who had an active order of protection against him,

On July 23 at approximately 3:45 p.m., Deputies were dispatched to a residence in Honeoye in Ontario County for a family trouble that had occurred earlier on Big Tree Road in Lakeville, Livingston County.

Livingston County Deputy Scott Patterson arrived at the Honeoye residence and met with an Ontario County Deputy, the victim, and the suspect, Fraser. The victim said that when they were at the residence on Big Tree Road in Lakeville, Fraser bit her on the left shoulder blade and took away her cell phone as she was trying to call the police.

Fraser was charged with two counts of criminal contempt for one incident. The first count was because there was a standing order of protection in favor of the woman at the time of the alleged contact, and the second county was because Fraser had been convicted of Criminal Contempt in the Second Degree in 2014.

Fraser was placed in custody and transported to Central Booking at the Livingston County Jail for processing and pre-arraignment detention.

The investigation and arrest were handled by Deputy Scott Patterson and Sergeant James Merrick of the Livingston County Sheriff’s Office.