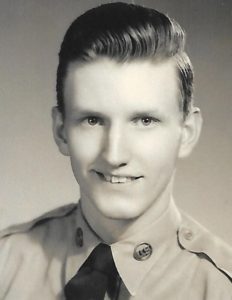 Irv joined the US Air Force and served active duty from 1954-1958 and in the reserves from 1958-1962.  He was honorably discharged and was always proud of his military service.  He enjoyed time with family and friends the most.  Irv was loved by so many.  Everyone who met him would say he was such a kind and caring person.  He always had a smile on his face.  He was a huge Buffalo Bills fan and loved watching the football games.  He also enjoyed baking muffins for his friends at Country Lane.  Irv was known to some as “Irfie”.  We will miss him very much.

No prior calling.  A Graveside Service, with military honors, will be held at 2pm on Saturday, October 10th, at St. Michael’s Cemetery, Shelly Road, Livonia, NY.  In lieu of flowers memorial contributions may be made in his memory to the Veterans Outreach Center, 447 South Ave., Rochester, NY 14620.  To send a condolence or share a memory please visit: www.doughertyfuneralhomes.com