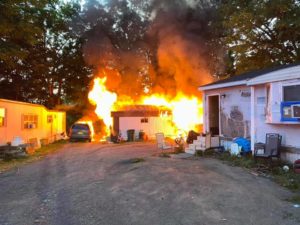 Livonia, Lakeville, Hemlock and East Avon Firefighters were called to a working fire at 5129 East Lake Rd on Conesus Lake, Lake Forest Trailer Park on Friday, June 26, at about 8:50 p.m. Thick black smoke could be seen from the west side of the lake, and the blaze could be seen for miles. The trailer was a total loss, as was a car which had been parked nearby. Residents were safely waiting outside when fire trucks arrived. There was minimal damage to surrounding mobile homes from the heat of the fire which was extinguished within about half an hour.

According to a post on social media by Rebecca Baker, the resident of the mobile home,  3 cats, nine kittens, and six dogs were lost in the fire.  One puppy was rescued by a neighbor and was taken to the Henrietta Emergency vets Friday night.