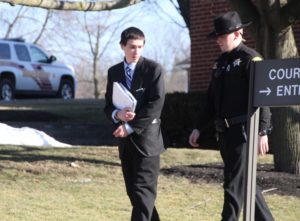 After a four-day trial, LaDue, 21, was found guilty of misdemeanor Endangering the Welfare of a Child and misdemeanor Criminal Contempt in the Second Degree. Those charges were for smoking marijuana with one of the complaining witnesses and sending her texts after he was arrested in this case and an order of protection was in place.

Judge Robert Wiggins remanded him to the Livingston County Jail without bail for sentencing at a later date.

The maximum sentence that LaDue can serve for these misdemeanors is 2 years in local jail, of which he has already served 9 months while the case was pending. If he were found guilty of three or more of the 18 counts of Rape in the Second Degree, he could have served up to 20 years in prison.

He consistently refused offers by the DA’s Office of a guilty plea to a lesser charge, 6 months in jail and 10 years on probation leading up to trial.

“No I did not,” testified LaDue, his suit jacket slightly too big for his shoulders, whenever asked if he had sex with either girl.

“I would never do that with her,” he said of one witness. “I thought of her as a little sister from even before I lived there.”

Three of the 18 charges were dismissed Wednesday with no opposition from the District Attorney’s Office because the prosecution offered no evidence supporting those specific instances of sex acts.

Assistant District Attorney Victor Rowcliffe called 1o witnesses to the stand. The GeneseeSun.com is withholding the names of the complaining witnesses, who are two teenage girls, and the mother of one of the girls. Witnesses for the prosecution were: both girls; the mother; Deputy Scott Patterson; Deputy Matthew Thomas; Deputy Michael Williams; Deputy Geoff VanDunk; Investigator Gene Chichester; forensic expert Bryn Joslyn; and Springwater Town Justice Donald Haywood.

Complaining witnesses testified that LaDue lived with the family of one girl and was considered part of the family until the allegations arose, and testified to the specific sex acts that they allege occurred. Police testified that the investigation and evidence handling was done as it would be in any case.

LaDue’s defense attorney, Livingston County Assistant Public Defender Lindsay Quintilone, says that LaDue maintained his innocence from the very first police interview. She called Investigator Dan Rittenhouse to the stand to replay parts of an interview he had with one of the complaining witnesses.

She called into question the admissibility of evidence based on the way it was handled, specifically saying that socks given to investigating Sheriff’s Deputies that allegedly contain biological evidence from LaDue could have been tampered with, either before being given to police by the mother or on their way to the crime lab in Monroe County. Judge Robert Wiggins allowed all of the socks to be entered as evidence.

Both the prosecution and the defense rested Wednesday and gave their summations Thursday before the jury deliberated.

LaDue will return to court at a later date for sentencing. 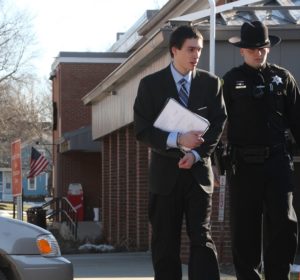