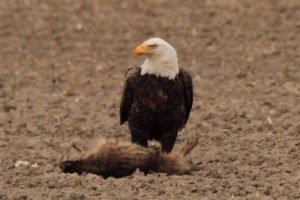 One of the pair feeds on a young raccoon, likely a casualty of high-speed traffic on Rte. 63. (Photo/Mark Martin)

YORK – If you cruise the expansive flats on Rte. 63 in Piffard, you are passing through the kingdom of a magnificent pair of birds.

Locals regularly come under the gaze of these talented aerial predators as they take up their thrones on dead trees. Their impressive wingspans make them easy to see from a mile off as they go about their daily duties on the flats.

“I’ve been seeing them in that area for the last couple years, either in the early morning or around lunch time,” said Mark Martin. “They roost in the big old trees along Rte. 63 and up Chandler Road.”

The king and queen may have set up residence here to perform a morbid but important service. Martin has detailed photographs of them feeding on a young raccoon that was likely hit by a car and either flung or crawled away from the road to die.

The free morsels fuel the proud parents of at least a few heirs, who are dispersing through the region to establish their own kingdoms. Photographer and nature lover Mark Van Norman documented the growth of some young eaglets in a nest he discovered in Letchworth State Park. You can see his photos in our prior coverage here. Other active nests are known to savvy residents in and around Livingston County.

“I have seen juveniles on the flats too and by York Landing at the Greenway,” said Martin. “There’s a nest on the Oatka Trail just outside Mumford.”

The bald eagle’s future was not always so rosy. Just 50 years ago, a fairly brief period on the ecological clock, widespread use of pesticides once caused the majority of their egg-rearing attempts to fail, critically endangering the species. Many wildlife experts believed and published that the extinction of large raptors was inevitable.

However, the New York State Department of Environmental Conservation and their local partners’ aggressive eagle restoration programs from 1976 to 1989 raised public awareness to the dangers of certain pesticides, restricted the use of toxic substances that interfere with the birds’ breeding, transplanted wild and captive-hatched birds, and protected critical eagle habitat.

The DEC’s research, monitoring and management of wild eagles continues to this day. As many wildlife enthusiasts know, the birds are in better standing today than any time in the past 50 years. 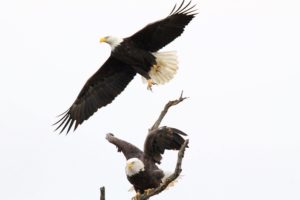 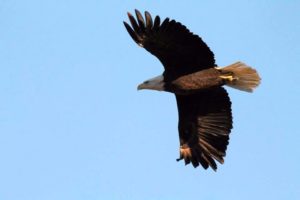 The eagles are easy to see while flying. (Photo/Mark Martin) 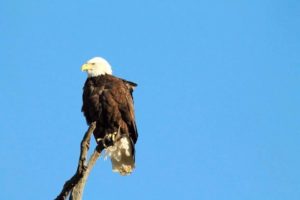 Perched on a throne. (Photo/Mark Martin) 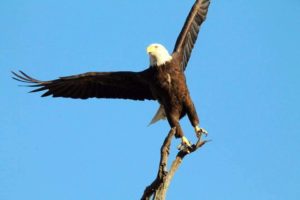 One of the pair takes to the sky. (Photo/Mark Martin)