LIVONIA – Student volunteers and participants are pushing to make the Friends of Livonia Education Foundation cross country 5K a bigger boost than ever for community activities that complement Livonia Central Schools.

Now in its fourth year, event has grown to be one of the chief fundraisers for the Friends of Livonia, a young organization designed to put on community activities that complement public programs from Livonia Central Schools.

“There is a lot of participation from local kids,” said Race Director Ryan Snyder. “Half of the runners are kids. We have four and five year olds walk the whole course with their parents. The JV and varsity soccer teams run and the cross country teams volunteer on the course.”

The entire course is on the cross country field at Livonia Central Schools. The race goes off Oct. 1 at 9 a.m.

Local businesses are throwing in unconventional prizes for finishers. The first runner across the finish line will receive sunglasses from Four Courners Eye Care and Optical in Honeoye Falls. The oldest runner to finish will win a photo by a local artist. The youngest will win a backpack.

The Friends of Livonia has its roots in an impetus to extend local kids’ educational opportunities beyond the services provided by Livonia Central Schools’ tax-based education.

Funds raised by this and other events push programs in academic enrichment, community education, and incentives like scholarships and financial assistance for students.

“The organization started in 2014 as a way for a principal to enhance what was already going on in the district with taxpayer funding,” said Snyder. “It’s turned into a really cool homegrown effort.” 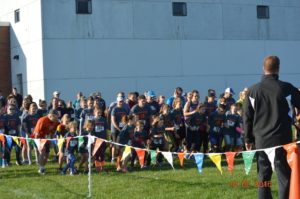