LIVINGSTON COUNTY – The Livingston County Sheriff’s Office’s H.E.R.O. Program has now shown the true damage heroin can do to over 1,000 local kids.

According to a press release from Livingston County Sheriff Thomas Dougherty, the H.E.R.O Program (Heroin Education, Resisting Opiates) began three years ago at the Dansville Central School District. The program continues to grow with seniors from every high school in Livingston County invited to attend.

This year’s event took place at the Wadsworth Auditorium on the campus of SUNY Geneseo, where approximately 600 students attended the program.

The program was moderated by Dansville High School Principal Tom Frazier. The students heard emotional and powerful presentations from parents who have lost children to a heroin overdose, Sheriff Dougherty, a Livingston County Jail inmate who has had been incarcerated due to heroin addiction, a recovering addict who is currently in counseling, the Dansville School drug and alcohol counselor, and a mock ambulance call by the Livingston County EMS representing a heroin overdose.

Dougherty thanked the school districts for their commitment to educate their students to the opiate crisis. Dougherty would also acknowledged the Dansville Central School District, Livingston County EMS, parent and family victims, Council on Alcohol and Substance Abuse of Livingston County, and the SUNY Geneseo Staff for their support and planning of the program. 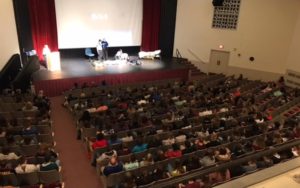