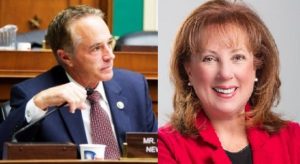 Collins told MSNBC that the Khans are making disrespectful political use of the death of their son in the Iraq war as ‘attack dogs’ for Hillary Clinton. Collins’ opponent for the upcoming election for 27th Congressional District, Diana Kastenbaum, quickly teed off on this with a media statement.

“Collins continued to be Trump’s surrogate by reiterating the insults to the Khan family in his interview,” said Kastenbaum. “To have a talking point, which he used not once but twice, saying that it happened 12 years ago made it seem somehow irrelevant. My response to Mr. Collins is – the loss of a child has no expiration date for one’s grief. Collins also stated that Mr. Khan is not immune from anything as he has entered the political fray; therefore he leaves himself open to condemnation and criticism. I would ask Mr. Collins, is that how we treat the memory of our heroes and Gold Star Mothers among us?”

Kastenbaum further said that Mr. Collin’s defense of the Trump attacks on the Khan family was another opportunity for him to stand by the Republican nominee and the divisiveness that he is inflicting on our country, calling his remarks ‘insensitive to the Khan family and self-serving.’

Collins has been Representative for New York’s 27th Congressional District since 2013.

In February 2016, Collins became the first active member of U.S. Congress to back Trump.