AVON – A man fled from police at a traffic stop on 390 that eventually led to felony drug possession charges.

According to a press release from Sheriff Thomas Dougherty, Cody Burch, 31, of Friendship, and David Heath, 28, of Rochester, were each charged with felony Criminal Possession of a Controlled Substance in the Third Degree and several other charges.

On March 27, Deputy Shawn Whitford stopped a vehicle for alleged violations of the NYS Vehicle and Traffic Law.

During the roadside investigation, Whitford suspected that Burch and Heath were involved with drug activity ‘due to odors and indicators through his training and experience.’

While Whitford patted Heath down outside the vehicle, Heath allegedly attempted to flee on foot. Heath crossed the four lanes of traffic across the 390 and was taken into custody on the east side of the road following a state police K9 apprehending him.

The Sheriff’s Office alleges that Heath threw marijuana on the ground as he was running away. The marijuana was allegedly recovered by the deputies. As the investigation continued it was discovered that Burch and Heath were in possession of crack cocaine in the vehicle. In total, 12 bags of what is believed to be crack cocaine were found in separate areas of the vehicle weighing over 14 grams.

Several members of the Sheriff’s Office Road Patrol Division were on scene assisting under the command of Sheriff’s Sgt. Matthew Orman. State Police members also assisted on scene, including Trooper TJ McDonnell of SP Geneseo, who assisted by providing valuable information to Deputy Whitford regarding the vehicle on 390, as well as utilizing his K9 partner Mic in the apprehension of Heath.

Burch and Heath were turned over to Central Booking Deputies at the Livingston County Jail for processing and pre-arraignment detention. The District Attorney’s Office was contacted in regards to bail and recommended $1,500 cash or $3,000 bond for Burch and $4,000 cash or $8,000 bond for Heath.

Both are scheduled to appear in court at a later date to face the charges. 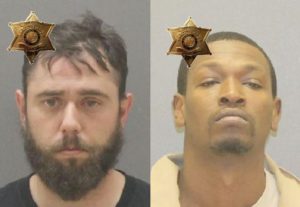