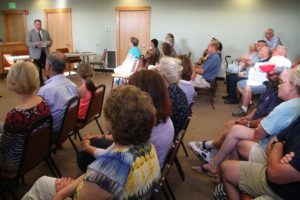 LIVONIA – Wednesday night’s hotly contested Republican caucus for Livonia Town Justice ended with incumbent Justice David Mahoney far ahead, but not before each of the candidates could make their complaints about each other.

The final tally was 33 Brown, 63 Mahoney. Both candidates spoke briefly before voting began at 7:17 p.m.

“Records show that on many occasions subjects are not arraigned in Livonia Town Court because this Justice will not go out to court arraignments even though your tax dollars require him to do so,” said Brown. “My opponent and I are from different generations, I realize that. I have the utmost respect for people of this generation, which my parents were born into as well. I have run a positive campaign based on my beliefs and the values that have steered me away from many personal attacks of my opponent. I do not feel that this has been reciprocated. I decided I was interested in running for Justice just shy of two years ago. It seems as though my opponent only became passionate about being a judge recently when I announced my candidacy. I feel that with the title of Town Justice, you have to have a passion and commitment to serving your community and committed to making it better. I pledge to you right here and right now that I will indeed be an advocate for the citizens of Livonia and be committed to improving the community, especially as it relates to the epidemic of illegal drugs. My campaign is supported by Sheriff Thomas Dougherty, Supervisor Eric Gott, Mayor Callan Latham, and many Deputies of the Sheriff’s Department who are here this evening.”

“Jack will be FAIR but TOUGH ON CRIME and will be a great addition to our Court system and continue the good work that Judge Lemen and Clerk Kolleen Redman do,” posted Livonia Town Supervisor Eric Gott Jack made a late social media push on Facebook for Brown at 5:09 p.m. “Jack has been endorsed by many Law Enforcement folks and I think they would know best when change is needed. I ask that if you get a chance visit his [facebook] page Jack Brown for Livonia Town Justice and please consider joining me tonight when I vote for Jack.”

Brown is currently chair of the Pharmacy department at St. John Fisher College. Justice Maloney is currently retired. He worked as an attorney for 44 years and became Justice in 2012 when then-sitting Justice Steven Sessler resigned to run for Livingston County District Attorney.

“We [Justices] are available when called almost 24/7,” said Justice Mahoney. “The exceptions do occur due to illness or traveling. The system is set up for those inevitable situations. A justice from a neighboring town is called. Judge Lemen and I often answer calls from other jurisdictions when their Justices are not available. I am currently retired. When I worked full time in Rochester, I would not have had the availability for this position. I have developed an excellent working relationship with our Sheriff’s Deputies, State Troopers, DA’s and local lawyers, but we all know that we must respect separation of power. We keep our roles and responsibilities separate.”

In the final hour of tallying votes, Brown, who had left the Livonia Town Hall, returned to point out that Mahoney had not left the voting premises and remained 100 feet away as required. Justice Mahoney and caucus organizers apologized, saying that Maloney had not been informed and had only spoken to local friends while waiting for the caucus results.

However, Brown has himself has been approached about possible faux-pas during his campaign.

According to Section 100.5 of the Administrative Rules of the Unified Court System and Uniform Rules of the Trial Courts, judicial candidates are prohibited from “publicly endorsing or publicly opposing (other than by running against) another candidate for public office.”

Neither candidate has sought formal reprimands against the other.

Brown conceded the nomination to Justice Mahoney after the votes were counted with a two-voter disagreement between total votes cast and the number of voter signatures collected for the night. 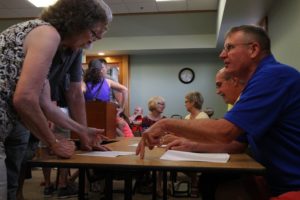 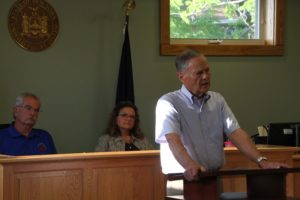 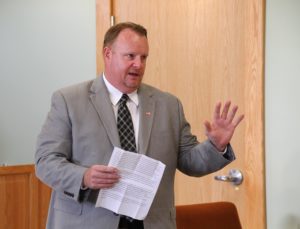 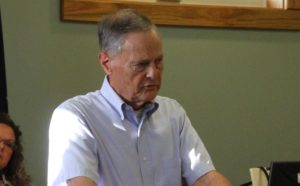 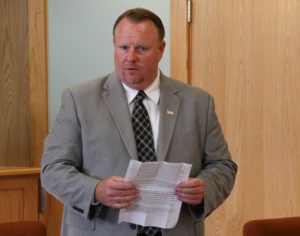