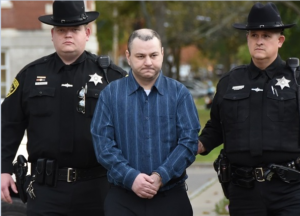 LIVINGSTON COUNTY – A more than two-year courtroom saga is over for the man who murdered and burned the body of a 64-year-old woman on Lacey Road in Caledonia.

Judge Dennis Cohen sentenced Aykut ‘Ike’ Ozkaynak, 37, to 25 years to life in prison for Murder in the Second Degree and one and one third to four years in prison for Tampering with Physical Evidence. A jury convicted Ozkaynak of both felonies at trial, where his accomplice and former girlfriend, Mary Neverett, testified.

“Nothing in the report suggests that the court should give any leniency or consideration for your future,” said Cohen. “As the DA said, Ms. Neverett’s testimony was compelling. The jury found it compelling, as I did. She described the brutal way that you murdered Ms. Miller, held her down, suffocated her, left her lifeless body in the room and took a nap. […] Mary testified that you could hear [Miller’s] bones crack as you stuffed her into a bucket and took her out to a field and burned her.”

The sentences are the maximum prison terms allowable by law.

Cohen said that the pre-sentence report noted Ozkaynak’s significant history of marijuana and cocaine use. Neverett testified at trial that when they weren’t working, she and Ozkaynak would abuse cocaine. They would steal and sell Miller’s property from around the apartment in Gates, where they all lived.

Miller suffered from chronic pain and medical problems throughout life. Neverett described Miller as ‘miserable’ and that Ozkaynak would sometimes suggest ‘just getting rid of her, killing her.’ Neverett said that she finally held Miller’s arms and legs down on a bed while Ozkaynak held a pillow over Miller’s face, smothering her.

At trial, Livingston County District Attorney Greg McCaffrey called witnesses to testify that Ozkaynak and Neverett sold Miller’s exercise equipment and car before struggling to fit her body into a laundry tote, driving it to Lacey Road in Caledonia, where they tried to burn her but ran out of lighter fluid. They bought more lighter fluid then returned to the scene to add a pallet to the fire and light it again.

The investigation began in the early hours of July 4, 2016, when some local fishermen drove by the fire and thought it looked like a burning body.