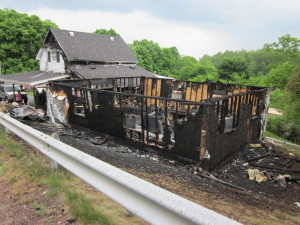 LIVINGSTON COUNTY – Brandon Rosa sobbed at the defense table on Tuesday as a judge sentenced him to prison for breaking into a stranger’s house in Mount Morris, ripping property apart with a blunt tool, burning the garage to the ground, and telling responding police that his family was inside.

With his family looking on, Rosa, 26, of Perry, was sentenced to 5 years in prison and 5 years of parole supervision. He and his attorney Kevin Van Allen explained that the destruction in Mount Morris belies his truly nonviolent nature and that he has agreed to pay the price for his actions in prison.

“That day in January was the hardest day of my life, pleading guilty to these horrific crimes, saying goodbye to my loving wife and children,” said Rosa through tears. “With that being said, I thank my supporting family, my lawyer and the judge for helping me realize the effect of being under the influence of drugs.”

Rosa was ready to take his case to trial when he pled guilty on Jan. 27, 2016, the morning of trial. He will owe the homeowners more than $44,000 in restitution for damages to the garage, the house, vehicles, and property.

Livingston County District Attorney Greg McCaffrey is not satisfied by this sentence. McCaffrey recommended that Rosa be sentenced to 7 years in prison, but Judge Robert Wiggins chose to sentence him to 5 years instead.

“We never deviated from our position, which was that Rosa should get substantial prison time,” said McCaffrey. “It is the court’s function to sentence as appropriate. I don’t agree with the court’s decision, but I respect it. This is one of the most horrific property crimes I’ve ever seen, and it puts me in a tough position to have to explain to the victims, the firefighters, the members of law enforcement who he sent into that building why he got such a lenient sentence.”

Van Allen says that Rosa’s actions in 2014 were the result of substance abuse to the point of losing control of his actions, and that rehabilitation is more appropriate than incarceration in this case.

“This incident was a direct result of his abuse of drugs,” said Van Allen. “No amount of incarceration or punishment can bring back property. By all accounts, including that of the Wyoming County Probation Department and respected members of our community, Mr. Rosa is a good man who made awful choices one night.”

Judge Robert Wiggins said that Rosa’s family and community members did indeed send multiple letters vouching for him, but that the sentence will ultimately leave both the victims and Rosa’s family disappointed.

“I understand frankly that no one will be happy with this sentence,” Wiggins told Rosa. “Your family will say that it is unduly harsh. The victims will say ‘wait a minute, he took our life away, why isn’t he getting the max?’ Justice has a blindfold for a reason. Justice isn’t supposed to reflect hate and anger at a loss or the love of a family. My commitment was to come down from the DA’s recommendation.”

All of these sentences will be served concurrently, or at the same time.

“Prove those people right, who wrote on your behalf,” said Judge Wiggins as Deputies led Rosa from the courtroom. “Don’t let this destroy you, let it make you stronger.” 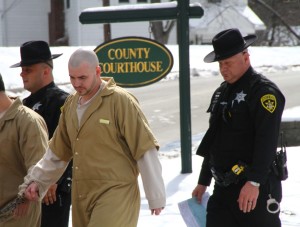 Brandon Rosa being led to jail after sentencing. (Photo/Conrad Baker) 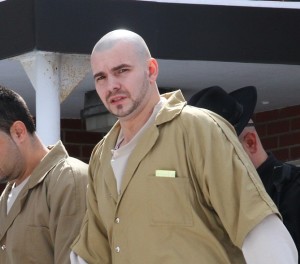