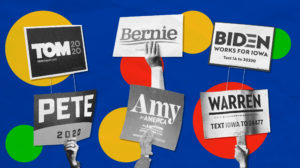 The New York Democratic presidential primary must take place June 23 because canceling it would be unconstitutional and deprive withdrawn presidential candidates Bernie Sanders and Andrew Yang of proper representation at the Democratic convention, a judge ruled Tuesday.

Today, Federal District Court Judge Analisa Torres’ May 5th order enjoining the BOE from canceling the NY presidential primary scheduled for June 23rd was affirmed by the 2nd Circuit Court of Appeals in a resounding victory for those who opposed its cancellation.

The suit was originally brought by presidential candidate Andrew Yang, and quickly joined by more than a dozen Bernie Sanders delegate-candidates who serve as members of the NY Progressive Action Network, as well as various NYS Democratic Party committees. They challenged the cancellation of the primary by BOE Democratic Commissioners Kellner & Spano, who were  appointed by Cuomo, who had secretly inserted on one page of a mammoth budget bill a new law making this possible.  The plaintiffs argued that, as in all other states remaining to vote, a safe, mail-based election could and should replace an in-person primary to guarantee the safety of New Yorkers while also preserving their democratic right to participate in elections to choose their representatives to the Democratic National Convention. The Courts have now agreed, twice.

George Albro, NYPAN Co-Chair and a plaintiff in the suit, commented: “We were all horrified that two unelected bureaucrats, at the behest of Democratic Party bosses, would actually cancel an election which hundreds of thousands of NY voters wanted to vote in; and this in a solid blue state. Setting a precedent for Trump and the Republican-controlled states was very dangerous, to say the least. Fortunately, many voters and activists who cherish democracy came forward to oppose this assault on our constitutional right to vote, and the courts listened to us and agreed”.

“Andrew Cuomo’s disastrous decision to support his appointed Board of Elections commissioners in an effort to thwart democracy and encourage backroom cronyism, especially in a time of great crisis and uncertainty, would be a fatal blow to our democratic society and the preservation of our Constitution,” said Stephen Carpineta, named plaintiff intervenor and communications director with NYPAN.

NYPAN is a grassroots progressive advocacy organization, founded after the 2016 General Election, and composed of over 30 chapters and affiliates across New York State. NYPAN’s mission is to provide on-the-ground support for progressive candidates, promote progressive legislation on issues including election reform, the environment, healthcare, and social and racial justice, and work with elected officials who will fight to achieve our collective goals. NYPAN is a chapter of Our Revolution and an affiliate of the New York Working Families Party.