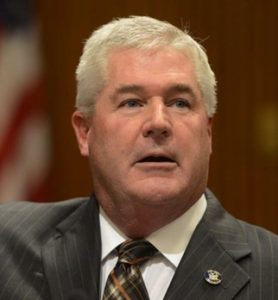 On New Year’s Eve in 2019, New York State Assemblyman Brian Kolb was returning from a party in Pittsford, when he accidentally drove the SUV he was driving into the ditch at the bottom of his driveway at his home in Victor.

.  When a tow truck was called to pull the SUV out of the ditch, a comment Kolb made in jest to the tow truck operator was reported to the investigating Ontario County deputy.   Thus, Kolb was given a breathalyzer test which resulted in him being arrested for a misdemeanor DWI.   Kolb took the initiative the next day to apologize for the comment, noting he was just joking to the tow truck operator who took him seriously, and announcing that he would not run for Assemblyman for another term. Kolb later pled not guilty to the dwi charge, which has yet to be heard by a jury.

In May, the comment to the tow truck operator was suppressed from being discussed in trial. However, a judge has reopened the case and now the suppression hearing for the 2019 offense will be reopened in November 2021. Handwritten notes taken by the sheriff’s deputy weren’t turned over to the defense and the breathalyzer report wasn’t handed over in a timely manner.

No date has been set for a trial on the charge.