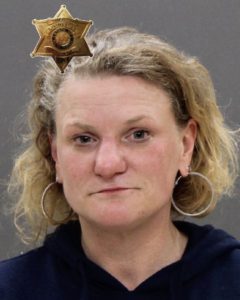 On April 24, 2021, Sheriff’s Deputies responded to the area of Cadyville Road, in the Town of Livonia, for the report of suspicious vehicles on the property of a local business during closed hours.
Deputies arrived in the area and located the vehicles, identifying one of the operators as Jonelle M. Given, age 44 of Hamlin, NY. During the investigation, it was discovered that Given was in
possession of two (2) forged vehicle registration plates and a forged vehicle inspection certificate.  A records check also revealed that Given’s NYS Driver’s License had been suspended, pending
prosecution and the investigation determined that Given had driven to the business.  Given was arrested and charged with two (2) counts of felony Criminal Possession of a Forged Instrument in the 2nd Degree and Aggravated Unlicensed Operation in the Second Degree.

Given was transported and turned over to Central Booking Deputies at the Livingston County Jail for processing and released on an appearance ticket to return to the Livonia Town Court at a later date, as the offenses did not qualify for arraignment or bail under the NYS Justice Reform Act.  Upon arriving at the Livingston County Jail, Given was searched by Deputies prior to being permitted into the facility. During the search, Given was found to be in possession of drug paraphernalia that was hidden on her person. Given was additionally charged with Promoting Prison Contraband in the Second Degree.

For the additional charge, Given was processed and released on an appearance ticket as well, as the offense did not qualify for arraignment or bail under the NYS Justice Reform Act.
Deputy Martin Herkimer and Sergeant Joseph Breu of the Patrol Division handled the initial investigation and arrest. Deputy Alicia Pritchard, Corporal Joshua Daly and Corporal Matthew
Romanowski of the Jail Division handled the additional investigation and arrest at the Livingston County Jail.