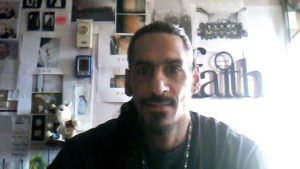 LIVINGSTON COUNTY – The local defendant who is back in court after an appeal of a guilty plea is demanding that his felony Menacing a Police Officer and Promoting Prison Contraband case be handled by a court outside of Livingston County.

Jospeh Harris, 47, demanded the change at a Thursday court appearance, saying that Judge Dennis Cohen and the entire County is biased against him. He is preparing a formal motion for Judge Cohen to consider.

“I am preparing documents to back up why the Public Defenders cannot represent me, why I need a change of venue, and why this is an injustice,” said Harris.

Harris added that he believes that Judge Cohen cannot fairly rule on this case because his decision to accept a guilty plea was overturned.

“I’m not going to have a fair trial,” Harris told Judge Cohen. “You hate me. You hate me because the Appellate Court said you don’t know what you’re doing and slapped you on the wrist.”

“I don’t hate you,” said Judge Cohen. “What we’re doing in this case is granting your wish to reverse your plea and have a trial in this matter.”

Harris’ currently assigned Public Defender, Lindsay Pratt Quintalone, said that her understanding is that her client has several pending law suits against Livingston County agencies, including the Public Defender’s Office.

Harris has a trial that is set to begin in Livingston County on September 26. Quintalone put on the record that she advised Harris that if he has any motions to file, now is the time.