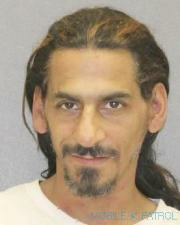 NUNDA – Less than a month after pleading guilty and finally resolving a three-year battle with Livingston County courts, Joseph Harris is back in jail, this time for allegedly injuring another person in a fight and impeding Nunda Police Officers in their investigation.

On Sept. 24 at about 8 p.m., Officer Mathew Whitney responded to a call reporting a fight between two males on Mill Street. Livingston County Deputy Sheriff Brent Gibbs responded as a backup officer.

Nunda Police allege in their press release that Harris became physically aggressive with officers and refused to comply before being taken into custody, and continued to repeatedly threaten the lives of Officer Whitney and his family.

Nunda Village Justice James Mann arraigned Harris and ordered him held at the Livingston County Jail on $500 cash or $1,000 bond.

Earlier in September, Harris pled guilty to felony Attempted Criminal Possession of a Weapon in the Third Degree and misdemeanor Criminal Possession of Stolen Property in the Fifth Degree which the DA’s Office charged in a 2013 indictment. The indictment charged eight crimes, four of them felonies. The agreed-upon sentence is ‘time served,’ or no additional jail time.

Still, Harris has lawsuits pending against County Court Judge Dennis Cohen and the Public Defender’s Office for allegedly mishandling his case, and against the Livingston County Sheriff’s Office for alleged abuses at the jail. He said in the past that he is unsure if he will appeal his felony conviction.