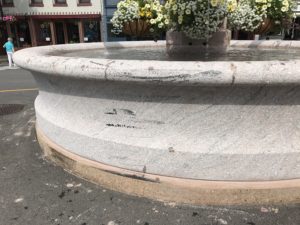 GENESEO – Social media is exploding over the bear fountain’s latest run-in with a vehicle, which happened at about 10 a.m. Wednesday.

“Well that’s the stupidest spot for a roundabout and too small an area,” Norm Michael. “With the way Geneseo has people park you need to pull half into the st to see what’s coming that’s just a rediculous intersection to begin with.”

“Get over it,” posted Robert Sutor. “Stop rationalizing incompetent driving.”

The driver of the vehicle, who asked not to be named, said that he was stopped facing westbound at Center and Main Street when he tried to turn south on Main, but drove directly into the fountain instead of going around the north side of the fountain and then turning south, like a roundabout. 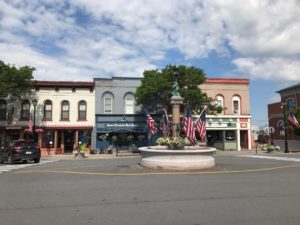 The vehicle comes to rest to the left of the fountain after the crash.
(Photo/Josh Williams)