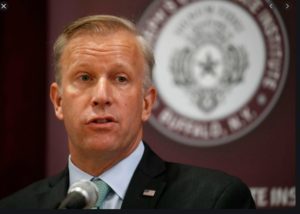 Congressman Chris Jacobs (NY-27) introduced legislation this morning that requires the Biden administration to provide long-sought transparency into efforts to reopen the U.S. – Canada border.  “This weekend, I called for answers and said I would be pursuing all legislative angles to get them. Today, I am keeping with that pledge,” Jacobs said. “16 months of indefinite, arbitrary closures are unacceptable. Enough is enough, the President and his Cabinet owe Congress, separated families, business owners, and homeowners answers – this legislation is designed to get them.”

Jacobs’ legislation, the Northern Border Reopening Transparency Act, would require the Department of Homeland Security, Department of State, and the Centers for Disease Control to produce a report within 30 days of enactment. The report would be transmitted to relevant committees in the House of Representatives and the Senate and must include all information regarding efforts to reopen the U.S. – Canada border.

Specifically, the legislation calls for all information regarding internal deliberations and discussions with the Canadian government on easing border restrictions. In addition, it calls for all information regarding the Department of Homeland Security and Department of State’s efforts to 1) establish a bilateral plan for travel between the United States and Canada, 2) develop a family reunification plan or allow family exemptions, 3) establish policies for property owners to travel to Canada, 4) allow reasonable travel for U.S. and Canadian citizens through boundary waters, and 5) unilaterally open the United States side of the border.

This bill reflects and expands upon a request for information Jacobs and the members of the Northern Border Caucus made in a January 2021 letter to President Biden. The White House has not responded to this letter.

On January 21st, 2021, President Biden signed an executive order that, in part, directed members of his cabinet to develop a preliminary plan into opening the border and public health measures.

“For months, families and homeowners have been left in the dark by this administration, even after the President signed an executive order on his second day calling for a plan. It’s time for answers and action. The administration can no longer stall and refuse to provide information, Americans deserve to know what is being done to get the border open, and when it is going to happen,” Jacobs said.