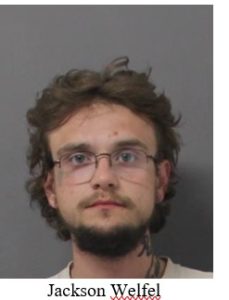 Steuben County Sheriff Jim Allard reports that on May 25, 2022, deputies of the Steuben County Sheriff’s Office arrested Jackson D. Welfel, age 23, of Lormore Street, Elmira, New York, following a report of a person stealing items from a retail center in Erwin.  It is alleged that Mr. Welfel stole approximately $60 worth of retail items.  It is further alleged that Mr. Welfel possessed a baggie containing suspected methamphetamine and was wanted on warrants from both the City of Corning and Village of Bath.  Mr. Welfel was charged with Petit Larceny and Criminal Possession of a Controlled Substance in the Seventh Degree.  Mr. Welfel was arraigned in the Centralized Arraignment Court for the new charges and the warrants and was released.