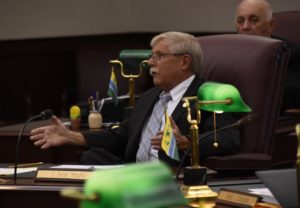 Yendell at Wednesday’s meeting on consolidation of public services at the Livingston County Government Center.(Photo/Conrad Baker)

LIMA – After 38 years of public service in Lima, Town Supervisor Pete Yendell has decided not to run for re-election this fall.

According to Yendell, his decision was finalized during his vacation earlier this year.

“I made my decision when I was down in Florida,” said Yendell. “When I was there, my wife and I talked. I’ve been at it for 38 years. It’s long enough. Having a month down there just kind of put the frosting on the cake to say, ‘You know what? It’s time.’”

Yendell believes that not running this fall will provide the opportunity for some fresh perspective on the Town Board.

“After a while you get kind of stale, and it’s time for some new blood to take over and new ideas,” said Yendell.

Since the start of his career in public office, Yendell has served in numerous roles for both the Town and Village.

“I spent four years as a Trustee. For two of those, I was Deputy Mayor,” recalled Yendell. “18 years as Mayor, and then I’ll have 16 in at the end of this year as Town Supervisor.”

Yendell said that the Town has changed significantly since he first began in office.

“It used to cost money to call Avon, and I worked with the telephone company to get toll free calling,” said Yendell. “We made improvements to the sewer plant while I was in charge. We brought public water into the Village of Lima from Rochester. We still continue to seek new business, the right kind of business for Lima.”

Under Yendell’s leadership, Lima also brought to completion a Comprehensive Plan that was adopted in 2008, as well as adopting an Agriculture and Farmland Protection Plan.

As Yendell passes the torch this fall, he believes that his successor will start off on a good foot.

“I just think when I leave that we’ll be in, hopefully, better shape than when I got in office,” said Yendell. “I’ve left all our fund balances in good shape. So it’s not like I’m leaving the town and we’re going to be broke when I leave. And I’ve had good boards throughout the years and that’s always a help. You can’t do this stuff alone. It just doesn’t work.”

Even as he looks to the future, Yendell reflects on his experience serving Lima as positive because of the opportunity it afforded him to work with people.

At this time, Yendell believes he may be the only current office holder from the Town Board that will not run for reelection, though he added that that may change as Election Day approaches. 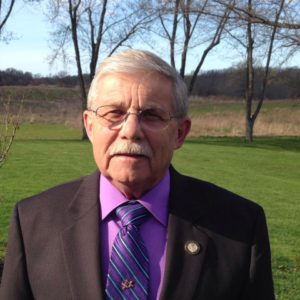