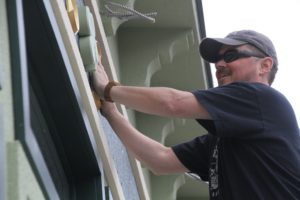 GENESEO – Love, sweat and skill have finished the building and bar at Kelly’s Saloon. A fresh sign means that the bar is nearly ready to open its doors for the first time since July 29, 2015.

Owner Sarah Dieter said that the intense effort would have been impossible without the help of family, friends and community members.

“It’s taking a village, just like it always did before,” said Dieter. “It’s a beautiful, beautiful thing.”

Her father, contractor Phil Deiter, and his crews built the entire structure on the smoky scar that lay between 75 and 65 Main Street in May 2016.

Logger Steve Schiano donated all of the lumber needed to build the bar itself.

Fundraisers at the friendly Wadsworth Grill in York benefitted construction at Kelly’s.

Though there is no official opening date, the interior is steadily being painted and finished. 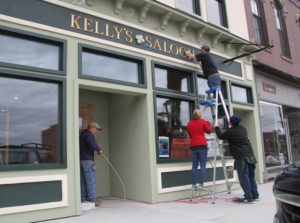 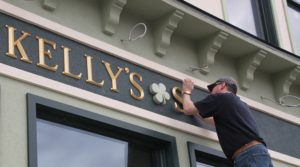