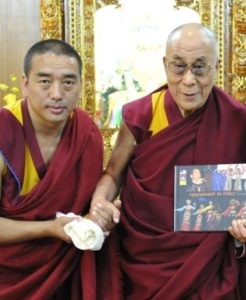 If you would like to learn more about Tibetan Buddhism, a repository of the leaders’ writings will be housed in Ithaca, NY, in the next few years, at a monastery 3 miles south of Ithaca. It will be the only collection of its kind in the world.

The world’s North American capital of the Tibetan Buddhist religion has been Ithaca, NY, since a colony of Tibetan Buddhist monks established a colony there in 1992, and later started building their monastery and study center on a 28 acre parcel of wooded land 3 miles south of Ithaca  Now it has been learned that the Namgyal Monastery in Ithaca NY will also hold the world’s only complete collection of writings of the present-day 14th Dalai Lama, as well as the complete writings of his 13 predecessors. There will also be  a museum containing historic artifacts associated with one of the world’s major  and oldest religions.

Presently, the monastery in Ithaca is a teaching/learning center of the Tibetan religion which is based on compassion, environmentalism, forgiveness, self-discipline and non-violence.   Buddhist Tibetan monks can be found worldwide, originating and ruling in Tibet, until the Chinese government usurped control and exiled leaders of the nonviolent, environmental friendly religion in 1959. The monastery of Namgyal Monks in Ithaca was founded in 1992, and has grown in size and scope as a teaching center by holding  retreats, workshops, educational lectures, classes,  and even a three-year Namgyal Institute of Buddhist Studies degree, It is  hosted by a staff of resident teaching monks, as well as many visiting professors from around the world.

In the announcement of the upcoming plans of being chosen for the site of  a world-center Buddhist library and museum, the directors in Ithacasaid they were pleased to have the honor, and “This will protect the legacy of the Dalai Lama and all that he represents to many millions of people throughout the world. Its primary mission is as a learning center for scholars and practitioners of all faiths, as well as scientists, educators, and philosophers of all disciplines.”

“ We are committed to the promotion of human values such as compassion, forgiveness, tolerance, contentment and self-discipline, as well as the promotion of religious harmony and understanding among the world’s major religious traditions…. and will work to preserve Tibet’s Buddhist Culture, which is the culture of non-violence and protection of the environment.” Thirteen million dollars has been raised through donations to build the library/museum, and more is being sought to complete the new project.