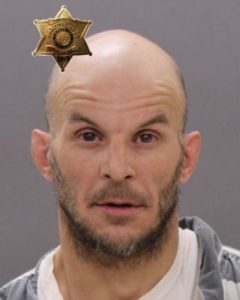 Sheriff Thomas J. Dougherty reports the arrest of a Monroe County resident on a felony charge following an investigation by the Sheriff’s Office.

On December 29th, 2021 at about 11:30pm Deputy Gordon Truax, who was assigned to the Sheriff’s Operation Safe Interstate  initiative, was patrolling Interstate 390 when he observed a vehicle traveling southbound that had been previously reported stolen by  the Greece Police Department. The vehicle was also believed to have been involved in a larceny from the Town of Mount Morris  earlier in the day.

Deputy Truax did conduct a traffic stop with the vehicle and identified the driver as Richard E. Scroger, age 40, from Rochester, NY. During the roadside investigation it was discovered that Scroger was in possession of approximately 3.5 grams of suspected cocaine,  which did later test positive for the same. Scroger was also found to be in possession of Diazepam, which is a pharmaceutical pill and  a controlled substance that he did not have a prescription for.

A records check did reveal that Scroger’s driving privilege in NYS had been revoked, with a total of 20 revocations/suspensions.

Scroger was actively on Parole with NYS Department of Corrections, who were contacted and advised of the arrest.

Scroger was transported and turned over to the Central Booking Deputies at the Livingston County Jail for processing and pre arraignment detention. The District Attorney’s Office was contacted in regards to bail due to the felony level charges. It was  recommended that Scroger be held without the possibility of bail due to having two previous felony convictions.

Assisting on scene with the investigation for the Sheriff’s Office were Deputy Bryan Mann and Deputy Jamye Babocsi of the Patrol  Division, as well as Investigator Shawn Whitford of the Criminal Investigations Division. The investigation was handled under the  command leadership of Sergeant Scott Patterson.