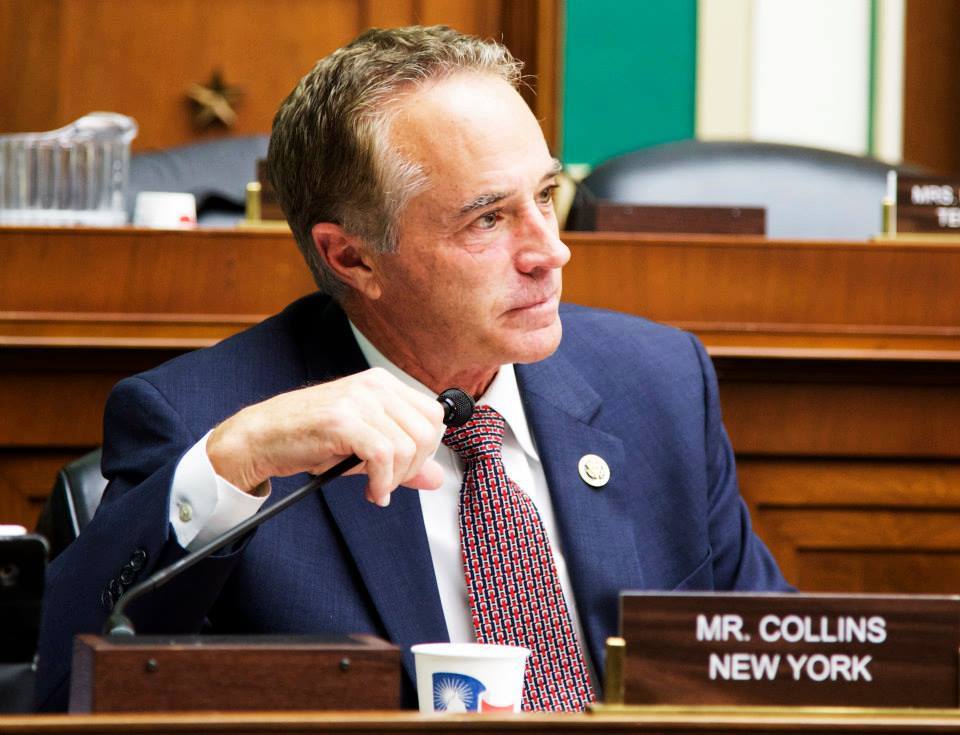 LIVINGSTON COUNTY — Local officials reacted with upset and confusion at today’s announcement that Congressman Chris Collins, his son and a friend were indicted on charges Wednesday of insider trading and lying to federal officials — Democrats saying the indictment is a sign of how distant Collins is from his district and Republicans urging people not to rush to judgement.

“Chris Collins has acted for years as if the only person he answers to is himself, not his constituents,” Hunter said. “He doesn’t listen to us and, apparently, he doesn’t listen to the law. I look forward to this process playing out because I think it will show just how little the constituents of New York 27 mattered to Christ Collins.”

John Pauer, acting chair of the Livingston County Republican Committee, said while he was taken aback by the news, he refused to judge the situation until he knew more.

“Everyone makes a judgement when the first accusation or statement comes out, and then they learn there’s more to it,” Pauer said.  “One of the things I have witnessed over the last several years is that a mere accusation is enough for conviction.  It’s awfully easy to throw out sound bites without facts, and find that down the road, there was a mistake in judgement.”

What neither local or state election officials could answer immediately is what could happen if Collins resigns. Would Republicans be able to field a replacement?  But, even under indictment, Collins still can run for office.  Though, Hunter argued that if Collins is considering his next move, “perhaps he should step out and meet some of his constituents and see what they would like” him to do.

“He has never asked us what we wanted before, but maybe he could start here,” Hunter said.

Pauer said he and other local Republicans needed to wait for more information from the Collins camp before rushing to judgement.

Collins’ challenger, Nate McMurry, said that while today’s announcement was “shocking and sad,” it wasn’t surprising and underscored the reason he’s challenging Collins in the 27th district.

“This has been unfolding, piece by piece, for many months,” McMurray said in a statement. “Anyone who’s been paying attention knows what’s going on. And now, the jig is up because no matter how this is spun, it is clear that the swamp is alive and well in Washington, D.C.

“Chris Collins has openly admitted that he serves only wealthy donors and that his proudest accomplishment is making millions for his friends here in Western New York and in Washington. That’s not what Congress is for and now what our democracy is about.”

Federal officials today charged Collins, his son, Cameron, and Stephen Zarsky, the father of Cameron’s fiancée, with insider trading and lying to federal officials. Officials from the U.S. Attorney’s Office of the Southern District of New York laid out the charges in a press conference today.

They said Collins, who was a chief shareholder and board member of Australian pharmaceutical company Innate Therapeutics, received devastating news in June 2017 that a drug the company was making to fight multiple sclerosis failed in clinical trials.   Investigators said the drug was the only viable investment the company had, and public news of its failure ultimately caused the company to lose more than 90% of its value.  However, the day Collins received the news ahead of the public release, investigators charged he immediately called Cameron, who alerted his fiancé and her family. This, investigators charge, led to a chain of people tipped off by Collins who were able to immediately sell their stock and avoid more than $768,000 in losses.

Further, when an investigation began, officials charge that the three men lied to investigators, resulting in the extra charges. Collins turned himself into federal authorities in Manhattan this morning.

Collins’ attorneys issued a brief statement saying that the government did not allege that Collins “traded a single share of Innate Therapeutics stock” and that they “will answer the charges filed against Congressman Collins in Court and will mount a vigorous defense to clear his good name.  We are confident he will be completely vindicated and exonerated.”

Collins is expected to speak on the issue later today.