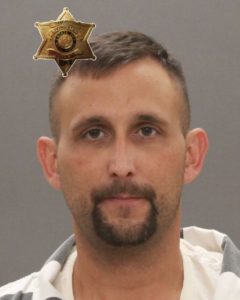 Sheriff Thomas J. Dougherty reports the arrest of an Ontario County resident on felony Criminal Contempt charges after an investigation by the Sheriff’s Office.

Santillo was remanded to the custody of the Sheriff being held on bail. The Judge also issued an order of protection against Santillo, protecting the victim of the Burglary. After Santillo was issued the order of protection in LC-CAP, it is alleged that he called the protected party from the Livingston County Jail booking phone and violated the court order. Santillo had been provided access to the jail booking phone in order to attempt to secure bail. On November 9, 2020 inmate Santillo was charged with felony Criminal Contempt in the 1st Degree. He was later arraigned again at the Livingston County Centralized Arraignment Part (LC-CAP) at the Livingston County Jail before Town of Ossian Justice Wilson. The Judge did remand Santillo to the custody of the Sheriff on $1,000 cash bail or $2,000 bond on the new charge.

On November 24, 2020 Livingston County Court Judge Kevin Van Allen issued an additional order of protection prohibiting Santillo from having contact with the protected party. On January 27, 2021 Deputy Heather Benjamin of the Jail Division discovered that Santillo was communicating with the protected party via video chat while using a tablet provided to inmates at the Livingston County Jail. Further investigation revealed that Santillo used the tablet to violate the order of protection on 39 separate occasions between December of 2020 and January of 2021.

The usage of tablets is monitored by members of the Jail Division and Sheriff’s Office Investigators were able to retrieve the video chats and secure them as evidence.

“We try our best to provide inmates with human contact during the COVID-19 pandemic, including video visitation through a tablet type program,” stated Sheriff Dougherty. “Unfortunately, certain inmates game the system and even disregard court orders to not have contact. In those type cases, the end result can be thirty nine felony counts. I hope the District Attorney and the court holds Inmate Santillo accountable to his alleged actions as anything less would be a horrible precedent to set.”