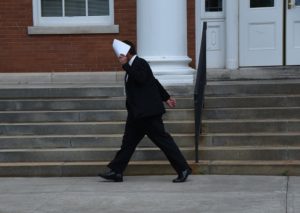 LIVINGSTON COUNTY – The Rochester man who pled guilty to a felony for a fatal Caledonia hunting accident late last year is on a mission to get his hunting privileges back.

John Lander, 51, asked Judge Robert Wiggins if he could have his hunting license back now that he has pled guilty to felony Criminally Negligent Homicide and been sentenced to 4 months of weekends with work release eligibility and a Conditional Discharge requiring a prohibition of hunting privileges.

“My client since the beginning of this case has accepted full responsibility for this horrific accident,” said Lander’s attorney, Livingston County’s Chief Public Defender Marcea Clark Tetamore. “For purposes of the record, the DEC has given Mr. Lander his hunting license back. He understands that there he is prohibited from possessing firearms but asks that you consider allowing him to possess a bow and arrow. He provides for his family with the meat that he obtains through hunting.”

“The answer is no,” said Wiggins after a brief off-the-record conference with Tetamore and the prosecution at the bench. “There was a fatality here. He may apply for a hunting license. I’m making no indication that he can’t apply.”

When asked if he had anything to say, Lander said simply, with his hands folded in front of him, “No sir.”

At an earlier court appearance, Lander said that the accident occurred off of River Road in Caledonia on Nov. 27, 2016, when Lander was carrying a shotgun over his shoulder with the safety off and accidentally shot his fellow hunter and sister in law, Sharon Lander, in the abdomen. She was pronounced deceased at Strong Memorial Hospital.

Wiggins said that the 3-year Conditional Discharge includes 4 months of weekends in jail and that Lander is to avoid any ‘injurious or vicious habits, Pursue suitable employment or course of study, refrain from hunting and abstain from any further crimes or offenses.’

During earlier court proceedings, Livingston County Assistant District Attorney Josh Tonra pointed out that Lander has three prior misdemeanor convictions in Texas, one for assault, one for violating what would be called an ‘order of protection’ in New York State and one for theft. Tonra also said that those convictions were in 1996, 1997 and 2004 and Lander has no criminal history within the past 13 years.

District Attorney Greg McCaffrey noted at sentence that Wiggins had reservations about the result in this case but said that ultimately the case comes down to an accidental death.

“I understand that the court has had significant reservations about this case and considers this a lenient resolution,” said McCaffrey. “This case was fully investigated by my First Assistant, Victor Rowcliffe, and myself. I personally responded to the scene of this fatality. Criminal negligence was found. There were several cases with similar facts across the state that did not survive Grand Jury and come back as indictments. This was a horrific hunting accident and I know the family supports this resolution.”

Lander left court on his own on Tuesday, to return to the Livingston County Jail to begin his weekend sentence. 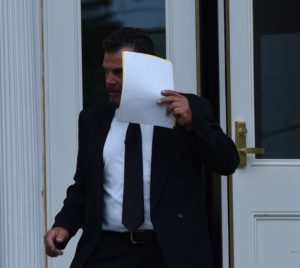 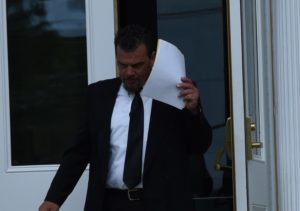