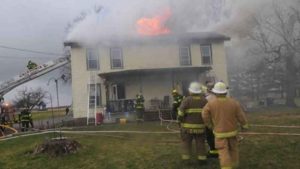 A house fire on Rt. 36, York was fought by nine fire companies on Sunday, Mach 28.  Fighting the fire was hampered by winds, and as a result the building received significant damage. However, everyone in the house was able to be evacuated safely.

East Avon was the first to arrive on the scene at about 1 p.m. and called in other fire departments. Cause of the fire was unknown.

Few other details were available as of this writing.