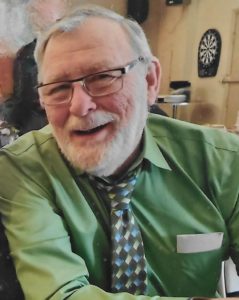 At age 74, David passed peacefully on June 27, 2022 at Strong Memorial Hospital in Rochester, NY. He was born on December 9, 1947 in Canandaigua, NY to the late Robert and Thelma (White) Bruce. In addition to his parents he was predeceased by his brother Tim Bruce, sister Peg Farrell, and sister-in-law Rose Bruce.  Survived by his wife of 52 years, Clarinda (Wesley) Bruce; children, Denis (Carrie) Bruce and Lacey (Chris) Bennett; grandchildren, Halen Bennett and Sydney and Declyn Bruce; siblings, Truman Bruce, Chris (Marilyn) Bruce, and Rose Flood. Also survived by many nieces, nephews, cousins and friends.

David graduated from Honeoye Central School in 1966. He went straight to work at Kodak then was drafted in 1967. He spent 2 years in the service. In July 1969 he returned home to Honeoye where he started dating Clarinda (Lindy). They were married in 1970. After returning, David went back to work at Kodak. Then through the years he worked at Ritter, Sybron Castle and Gettinge in Henrietta. While working David took night classes at the U of R for engineering. David and Lindy had two children Denis and Lacey. They made their home in Honeoye. After working 20 plus years at Gettinge.  David took early retirement for health reasons. For the last 22 years David dealt with Heart Disease and other ailments. David enjoyed his old cars, his new barn and spending time with his family. He especially enjoyed spending time with his grandchildren Halen, Sydney and Declyn. He was a wonderful husband, father, brother, uncle, grandfather and friend. He was one of a kind. David made everyday count. He will be truly missed.

Family and friends may call on Friday, July 8th, from 3-5pm at the Kevin W. Dougherty Funeral Home Inc., 8624 Main Street, Rte 20A, Honeoye, NY where a Memorial Service, with military honors, will be held at 5pm, following calling hours. A Gathering will be held at the family barn following the services, all are welcome. In lieu of flowers memorial contributions may be made to the American Heart Association, 444 Liberty Ave, Suite 1300, Pittsburgh, PA 15222.  To send a condolence or share a memory please visit:  www.doughertyfuneralhomes.com