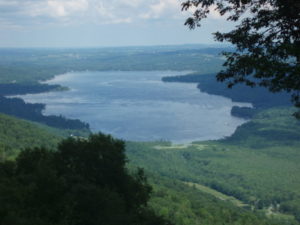 Honeoye Lake, one of the smallest (about 4 miles) and shallowest of the Finger Lakes, has been experiencing periods of significant algae and weed problems for at least the past 40 summers. The Honeoye Lake Watershed Task Force worked with the Ontario County Planning Department to submit and win a $30,000 grant from the DEC Water Quality Improvement Program to study a way to stem the algae blooms which seem to be worsening each summer.  The Honeoye Lake Watershed Task Force will be putting up the required $3000 local matching funds.

The grant money was used to hire Princeton Hydro of New Jersey earlier this year to assess the potential for an aeration destratification system to achieve nutrient inactivation in the lake, thereby stemming the algae bloom which is fed each summer by phosphorus released from the deep-water (18 feet and deeper) bottom sediments when the lake is stratified, depleting the dissolved oxygen near the lake bottom. In the absence of dissolved oxygen, phosphorus is released from bottom sediments.  The catalyst for the plan was the 2018 NYSDEC Honeoye Lake Harmful Algal Blooms (HABs) Action Plan which, through a lake and watershed modeling effort, estimated that 93% of the phosphorus fueling the lake’s blue-green algae blooms is being released from the lake’s deep water bottom sediments during the summer.   Evaluating an aeration destratification system was a high priority recommendation in the NYSDEC Honeoye Lake HABs Action Plan.

Princeton Hydro’s engineering report will determine if aeration of the deep water of the lake will significantly decrease phosphorus release from the bottom sediments, and will provide equipment specifications, with recommended locations for compressors and diffusers to distribute oxygen in the lake’s deepest waters, and recommend onshore locations for the compressors. In addition, Princeton Hydro will study the impact on lake’s fisheries, wetlands, recreational uses and access, noise, effect on bottom-of-the lake flora and fauna, aesthetics, and cost.

There will be a public information meeting in early summer for residents to learn more about how an aeration destratification would help improve the water quality of the lake, get their questions and concerns addressed, and provide their input into the decision-making process of to implement an aeration system or not.