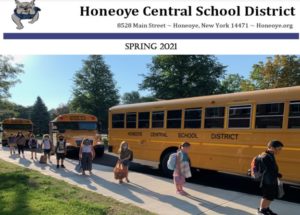 There are six candidates vying for the three school board seats, with the top three vote-getters getting a seat on the board.  The candidates are running for seats currently held by Keith Stumbo, Jerry Passer, and Andrea Badger.

Passer and Stumbo are running for re-election. Stumbo has served on the Honeoye Central School Board for 25 years, and Passer has been on the board for 15 years. The challengers for school board seats are Carole Baker, Tori Clark, Jim Helling, and Cyndi Sherman. All of the candidates have made campaign statements which are published in the school newsletter which was posted on May 1, and will be mailed out. It can be accessed at the Honeoye Central School website by clicking on “2021-22 school budget vote” and then clicking on the picture of the bus.

Unanticipated state aid and other monies were received for this upcoming budget.  The school is planning on holding “in-person” schooling next year, but will also continue the Chromebook program for students.  More details concerning the budget will be discussed at the May 5 meeting, as well as in the newsletter which is online, and will be mailed out.