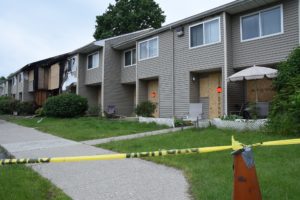 GENESEO – A hero Highland Apartments resident may very well have saved the life of a family dog and her unborn puppies during Saturday’s fire.

Saturday’s fire revealed the very best in the community at the Highlands. Both online and in person, neighbors to five families in Building 4, which is now condemned, are gathering as many clothes as possible to donate. But at no time did the community have these tenants’ backs more than when Highlands resident Shawn Konzel started kicking in doors looking for trapped people.

“I live on the opposite side and was building some shelves. I started seeing smoke and it wasn’t from a grill, it was dark,” said Konzel. “Usually when there’s a fire, you see the family frantic on the lawn, but there was no one. So I started pounding on the door. No response. So I kicked the door in and started yelling for people. I got a faceful of smoke and heard people screaming about a dog, and I could hear a dog barking but in another apartment. I had to get around to that side and kicked in the door, and the dog ran out. I was just glad that nobody was in there.”

Konzel still suffers a cough from smoke inhalation but says he is otherwise OK.

“My wife’s a nurse,” said Konzel. “She was at a women’s retreat that day so I called her up while it was happening but could barely talk I was coughing so bad. She made me go in the ambulance, just to do it. They put me on oxygen, made me blow my nose, thanked me and called me an idiot in the same breath, but I’m OK.”

Konzel added that the decision to enter the burning building and start looking for trapped people was instant and effortless.

“I spent five years in the Army. I didn’t even think twice about going in and had I thought about it, I probably wouldn’t have gone in three times,” said Konzel. “What happens if that’s our house? I’d like to think that somebody else would do this for us. I mean yeah it sucks that they’re not home, they’re not in their house, but they’re all still breathing. All this monetary stuff can be replaced. They can’t. I mean, they have little kids and she’s 6 months pregnant.”

Neighbors’ help didn’t stop when firefighters put the fire out and the smoke cleared. The entire community at the Highlands is pitching in and calling their families and friends to get the displaced neighbors on their feet. One family set up a GoFundMe fundraising page, available here, to recover their losses.

“I go to Pleasant Valley Baptist Church in Geneseo and told all of the families that they can come to the church for help,” said Konzel. “If they come with a specific need that we don’t have at the church, we’ll call around the other church families and see what they have.”

First responders were at the scene within one minute of the emergency call, but the fire destroyed one apartment and severely damaged the neighboring two. Geneseo Town Code Enforcement Officer Shawn Grasby condemned the entire building. 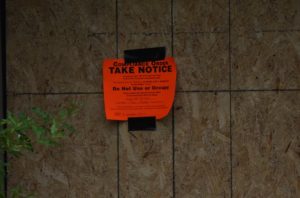 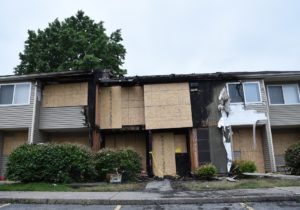