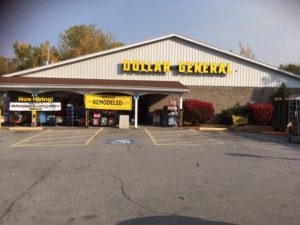 The Livonia Town Zoning Board voted 3-1 to grant a variance to the Hemlock Dollar General store, with some conditions.  The variance was needed because the Hemlock General Store developers are proposing a 9100 sq. ft. store, twice what is allowed by zoning statute in the Hemlock  Hamlet Mixed use zone.

About ten people were in attendance on Monday, Oct. 19 , at the meeting of the Livonia Zoning Board of Appeals concerning the Hemlock Dollar General.  The public hearing was held at the last meeting, so only  board members were allowed to speak at this meeting.

Some of the members of the ZBA board questioned whether or not, if the variance were granted, the 3.8 foot lot could be subdivided and sold off for the construction of other buildings, since there is access on two roads, and the proposed building only takes up about 60 per cent of the lot.

As a result of that concern, the condition was added that the town gets a deed restriction that the lot cannot be subdivided again, or other buildings built on it..  The only way that restriction could be overriden in the future is if the Livonia town board enacted a law to change it to allow subdivision.

When questioned by a board member about whether or not it was necessary to have a building that large, the developer representative said, ”In the larger stores like we are proposing,  aisles are wider, there are more coolers, they’re lit better, there are more grocery items.  The one in Livonia is the old business model at about 4000 sq. ft.; the new one will be the new model which is bigger;  we build the same size building everywhere now….it’s a reaction to what people want when surveyed in other markets, where there are other Dollar Generals.”

The board discussed the impact of the increasing the building size from the allowed 4,000 sq. ft building in filling out a SEQR statement, and  they voted unanimously that increasing the size of the building from what is allowed would not have a significant negative impact on the area.

The vote to grant the variance was 3-1, with Rosemary Bergin the dissenting vote. She said she felt that the impact of granting the variance was substantial, due to the double-size of the building, and the possible setting of a precedent.

The developers now have to go to the planning board, and get approval on a site plan, screening, and the details of the building with the Livonia planning board.

Before adjourning, one ZBA  board member said his vote was the result of the many letters that the board had received, and suggested that the town looking at changing the law concerning building size of commercial establishments in town….”Look around,” he said. “Wal-Mart, Wegmans….the larger buildings and businesses are part of most business plans…we need to be more flexible about business size.”