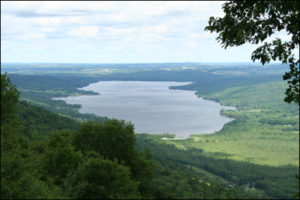 The Town of Richmond announced on June 22 that the Department of Health has closed Sandy Bottom Beach on Honeoye Lake to swimming.

The agency found the possible existence of blue-green algae, which is toxic to both swimmers and pets. It is unknown when the beach will reopen, pending the results of the tests.

Safety precautions need to be taken because the algae can produce toxins, which pose risks to humans and animals if they are exposed to the algae in large quantities, according to the Ontario County Public Health Department.

The NYS Department of Environmental Conservation states that Honeoye Lake, an 1,880-acre lake that is one of the Finger Lakes which it monitors for the toxic water plants.

Symptoms of toxic exposure may include allergic reactions or eye, skin, nose and throat irritation, according to county health officials. Ingesting large amounts of water containing these toxins has resulted in liver and nervous system damage in laboratory animals, pets, livestock and humans.

According to the State Agency there have already been 84 confirmed Harmful algal blooms (HABs)  since 2012, including 14 with high toxins. These blooms have caused closure of the designated swimming beach every year from 2012 to 2107, and led to 104 lost beach days. Although the causes of HABs vary from lake to lake, phosphorus pollution—from sources such as wastewater treatment plants, septic systems, and fertilizer runoff—is a major contributor.