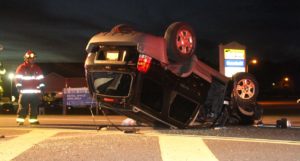 GENESEO – A vehicle rolled over in Rte. 20A (South Street) on Monday.

According to first responders on scene, the driver and sole occupant of the vehicle was driving at a inappropriately high speed out of the parking lot of Wendy’s when it struck and jumped over the parking lot curb, struck a light pole, and rolled onto its roof in the middle of South Street at about 6:38 p.m.

The driver’s injuries appeared to be minor.

No alcohol or drugs are believed to have been a factor in the accident.

Fire and police units responded from their detail at the Geneseo Halloween Parade, which began at 6:30 p.m.

The accident is still under investigation by the Geneseo Police Department with the assistance of the Livingston County Sheriff’s Office.

Geneseo Fire and Ambulance responded to the scene. 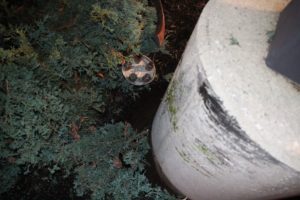 The pole that the vehicle struck, showing that it has shifted to the right from its original upright position. (Photo/Conrad Baker) 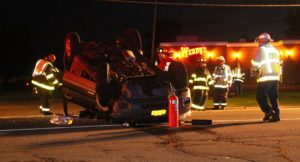