LIVINGSTON COUNTY – An Alabama, NY couple took the stand to testify that they feared for their lives when a driver nearly ran them off the road and appeared visibly intoxicated when police asked him to step out of his vehicle.

Based on their testimony and that of investigating police officers, a jury convicted John Anson, 41, of felony DWI and felony Aggravated Unlicensed Operation in Livingston County court. He now faces up to 7 years in state prison.

“Without the tireless work of Livingston County Sheriff’s Deputies Ryan Dale and Jason Butterbrodt and Dansville Police Officer Bryan Chapman on the day of the incident and after, this conviction would not have been possible,” said Assistant District Attorney Justin Hill, who prosecuted the case.

Elton and Laura Baker, the family from Alabama, NY, testified that they and their 2-year-old grandddaughter were headed home from a shopping trip at Walmart on Oct. 29, 2016 when a gray Toyota flew through a stop sign and nearly hit their pickup at Gibson Street and Rte. 63 (Main Street) in Dansville. Both testified that Laura slammed on her brakes to avoid a crash. They said they caught their breath then went on their way south on 63.

According to the Bakers’ testimony, the gray Toyota began tailgating their pickup, swerving over a double solid line. It followed them for half a mile, then pulled off onto Lackawanna Road, Dansville. Calling 911 and returning to check the vehicle’s license plate, they saw the car parked in the middle of a double solid on Lackawanna Road. They flagged down a Dansville Police Officer and stayed at the scene for about 2 and a half hours as police interviewed the driver, Anson.

Police testified that Anson smelled of alcohol, had glassy eyes, and appeared confused. The Bakers testified that it looked like he had urinated in his pants. Anson’s driver’s license was revoked due to a DWI conviction in 2010.

That was when the case got interesting. Anson refused to answer any of the police officers’ questions or perform any of their tests. All of the evidence against Anson was in the officers’ observations about his physical condition when they interviewed him roadside.

“We agree that he [Anson] did drive but he made it to his destination safely. He was sitting in the middle of the road. There was no accident,” said Assistant Public Defender Christopher Laragy. “This case is a bit unique in that he exercised his right to remain silent.”

Anson said that he refused to take breath tests because his previous attorney advised him not to. After the jury was sworn Monday, he revealed that that attorney was Greg McCaffrey, who is now the elected District Attorney, the county’s top prosecutor.

The jury deliberated for over 3 hours before unanimously voting to convict Anson of both charges.

Laragy could not be directly reached for comment as of 5:23 p.m. Wednesday.

The Livingston County Probation Department will perform a Pre-Sentence Investigation to recommend an appropriate sentence.

County Court Judge Robert Wiggins ordered that Anson be held at the Livingston County Jail without bail until he returns for sentencing. 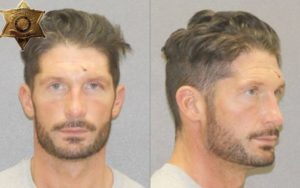