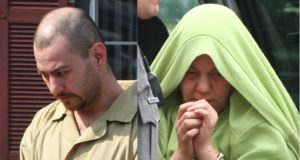 LIVINGSTON COUNTY — The Gates couple who had previously only been indicted in connection to burning a body in Caledonia are now facing charges for murder.

Aykut Ozkaynak, 35, and Mary Neverett, 43, have both been indicted by a Livingston County Grand Jury for Murder in the Second Degree, a Class A-II felony. When the pair were arraigned on a Tampering with Physical Evidence charge on Aug. 29, District Attorney Greg McCaffrey predicted additional charges would be added.

“I expect further charges,” said McCaffrey at that time.

Today’s appearance is based on the Grand Jury’s action on the new indictment laid against the couple.  It is alleged that they intentionally caused the death of their roommate, Patrice Miller, and then set her body on fire on the night of July 4.

Although they were each held on $500,000 bail for the Tampering indictments, Livingston County Court Judge Dennis Cohen continued an additional $500,000 cash bail or $750,000 bond on the Murder charges.

Neverett was represented in court by Assistant Public Defender Lindsay Quintilone and Ozkaynak by Steven Sessler.

Both are scheduled to appear back in court to argue motions at a later date.

Even the minimum sentence for Murder in the Second Degree carries the possibility of life in prison.

It is anticipated that these charges may be consolidated with the previously indicted Tampering with Evidence charges at some point in the future.

Ozkaynak and Neverett were arrested by New York State Police on July 7, 2016 after the grisly discovery was made two days prior.