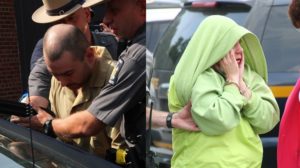 LIVINGSTON COUNTY – The two Gates residents suspected of the murder of their roomate, Patricia Miller, have been indicted by a Grand Jury and appeared in Livingston County Court on a felony charge.

Aykut Ozkaynak, 35, and Mary Neverett, 43, are both charged in County Court with felony Tampering with Physical Evidence. District Attorney Greg McCaffrey says that further charges will soon be presented to the Grand Jury.

New York State Supreme Court Justice Thomas Moran arraigned Ozkaynak and Neverett on the indictment. Both are held at the Livingston County Jail on $500,000 cash or $750,000 bond.

Both are presumed innocent.

Ozkaynak and Neverett were arrested by New York State Police for felony Murder in the Second Degree and Tampering with Physical Evidence on July 7, 2016 for allegedly killing Miller and burning her body in Caledonia on the night of July 4.

Both are scheduled to appear back in court for further proceedings.