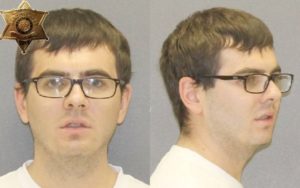 GENESEO – The Avon man who was run down and arrested at the scene of a fatal accident in 2016 was indicted by a Grand Jury on misdemeanor charges.

Michael Bellonte, 30, is now charged with misdemeanor Reckless Driving and violations including Harassment in the Second Degree and Imprudent Speed.

“I have to respect the Grand Jury’s finding,” said Livingston County District Attorney Greg McCaffrey. “If the Grand Jury is not finding felony level charges in the evidence presentation, what does that say about the likelihood that I’ll be successful presenting evidence for those charges at trial? It’s an absolute tragedy, especially for the Lackeys.”

“Geneseo Police and the Sheriff’s Office did a thorough job investigating,” said McCaffrey. “But the proof’s not there. Bellonte had toxicology done at the Monroe County Crime Lab, and without talking too much about what came out of Grand Jury, which is now sealed, there were substantial issues with the case at play here. Speed alone is not enough to charge Criminally Negligent Homicide.”

The accident shocked Village residents and members of the College community.

On Sunday, Sept. 11, 2016, Don Lackey and his wife Nancy were driving from their home on Westview Crescent to St. Mary’s Church, which is within sight of their street. At 7:50 a.m., a vehicle driven by Bellonte rear-ended them, pushing their vehicle into a ditch and killing Don Lackey.

It was the Lackeys’ wedding anniversary.

Witnesses said that Bellonte took off on foot from the accident scene with only a shirt and boxer shorts on. Geneseo Police Chief Eric Osganian said that Geneseo Police Officer Daniel Piedmonte and Livingston County Sheriff’s Deputy Martin Herkimer caught him in a foot chase near North Street. Reporters saw him alternately fight with and speak cooperatively with police after he was handcuffed.

When the Deputy Sheriff approached him, Bellonte punched him in the face.

Bellonte is scheduled to appear in Geneseo Village Court in March for the argument of motions on the misdemeanor indictment. 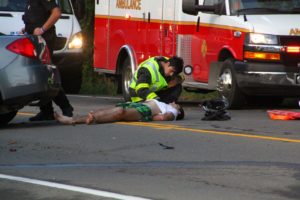 Bellonte being checked for injuries at the scene. (Photo/Conrad Baker) 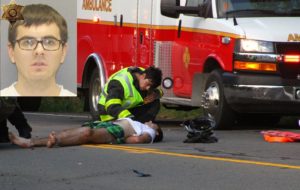