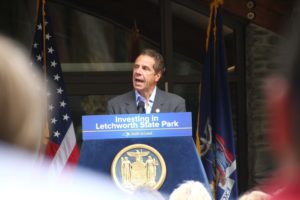 Governor Andrew Cuomo justified his decision by presenting a slide show to display the rate of the virus  is spreading in all 50 states.

Cuomo presented the slides which he said shows that New York’s slower reopening policies are benefiting its residents more than any other state – especially in comparison to those states that are allowing businesses to open more freely.

“States that have reopened too quickly or uncontrolled are now starting to close down. We are the exact opposite. Since we’ve reopened, the number has continued to go down,” the Governor maintained.

The Governor is under increasing pressure from businesses to speed up the loosening of restrictions.  In addition, many critics are stating that the Governor’s policies are causing untold mental illness problems as well as laying the groundwork for economic disaster within the state.

Despite the critics, Cuomo is holding firm on his position.  Using the slideshow to demonstrate the slowing down of COVID-19 he said it was “because we’ve been disciplined in our reopening and that’s what we have to continue to do so.”

The slides show the virus is spreading most slowly in the Empire State and neighboring New Jersey, both of which implemented strict stay-at-home policies to contain the pandemic’s outbreak.

Meanwhile, Cuomo said, states like Texas and Arizona have seen a surge in new cases.