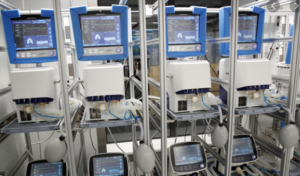 Governor Andrew Cuomo has decided to send ventilators and personal protective equipment from other hospitals and institutions around the state to places outside NYS.

Already it is being reported that the Governor will send 100 ventilators to New Jersey and has already sent ventilators to Maryland and Michigan.  This comes at a time when the State has reached its single largest increase in deaths within a 24 hour time frame.

Cuomo said that under his executive order, the institutions that the state takes ventilators from will either get them back or they will be reimbursed.

The National Guard will pick up and redeploy the life-saving devices and other equipment.

“So am I willing to deploy the National Guard and inconvenience people for several hundred lives? You’re damn right I am,” Cuomo stated.

“Right now we’re struggling to have enough for next week,” Mayor Bill de Blasio added, saying that next week the city will need at least 2,500 to 3,000 new ventilators.

“The ventilators to me are one of the clearest examples of life and death,” the mayor added.