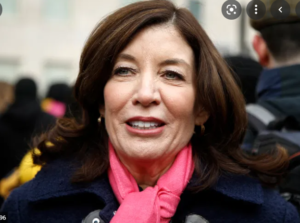 As a rule, most emergencies are obvious to the individuals experiencing them. In New York, though, that basic logic doesn’t apply. Gov. Kathy Hochul, again, extended her own “emergency powers” through Monday, August 22 despite COVID-19 cases and fatality levels dropping in an overwhelming majority of the state.

Simply stated, this is an absolutely brutal abuse of power. As I have said repeatedly, there are instances when it is beneficial and necessary to protect the public’s interest by temporarily suspending certain, specific governmental rules and procedures. However, Gov. Hochul continues to govern through extending her own unilateral power – something designed for extreme, rare situations, like a once-in-a-lifetime global pandemic – for political whimsy. This is fundamentally wrong and an affront to the democratic principles guiding our government.

Making matters worse, the extension of her emergency privileges does not merely permit the governor to employ unscientific guidelines or overly burdensome regulations as they did in the past, now they are costing New Yorkers money. Lots of money. One of the many benefits granted to the governor from her emergency powers is the ability to hand out taxpayer-backed contracts without having to go through the normal bidding process. That process, and the contract review and approval by the state comptroller’s office, are important safeguards to protect against inefficient vendors, wasteful spending and corruption.

Recently, Gov. Hochul used that lack of oversight to grant a no-bid contract to the family of Charlie Tebele, whose Digital Gadgets LLC has already pulled in an astounding $637 million selling at-home test kits. Also noteworthy is the $300,000 donation Tebele’s family made to the governor’s election campaign. This should never be allowed to happen.

New York state has endured great hardship during the height of the pandemic; however, labeling current conditions as an emergency is disingenuous and devalues both the word and the spirit of the law. The Legislature should immediately put an end to this abuse of power and restore the natural balance of government operations in New York. There is no excuse for this most recent extension and the interests of the people of New York should never be sacrificed for the political convenience of a sitting official.

If you have any questions or comments on this or any other state issue, or if you would like to be added to my mailing list or receive my newsletter, please contact my office. My office can be reached by mail at 19 Canalview Mall, Fulton, NY 13069 and by email at barclayw@nyassembly.gov. You may also find me, Assembly Minority Leader Will Barclay, on Facebook or on Twitter at @WillABarclay.