LIVINGSTON COUNTY – Eric Gott says that he will not seek reappointment as Chairman of the Livingston County Board of Supervisors.

Gott, who won re-election as Livonia Town Supervisor in November, has denied allegations by Heather Novak that he made unwelcome sexually charged comments toward her at a bar after a conference in Albany. In 2014, Gott was appointed Chairman of the Board and Avon Town Supervisor David LeFeber was appointed Vice-Chairman.

“I’m proud of what we accomplished with Eric as Chairman,” said LeFeber. “I’m open to the Chairman position, but the decision to elect a Chairman is now with my fellow supervisors on the Board.”

An email sent Wednesday by County Administrator Ian Coyle announced that the third-party investigation by the County’s contracted labor counsel, Hancock Estabrook LLP, found the allegations to be credible.

No violation of the law or policy are alleged, but Coyle’s statement said that the Board made it clear that any allegation of misconduct will be investigated since the County’s reputation is always paramount.

The Board of Supervisors signs resolutions and local laws on the county level. It is comprised of the Town Supervisors of all of Livingston County’s towns.

The County’s full statement is as follows:

In October, the Board of Supervisors was made aware of allegations of inappropriate conduct from Chairman Eric Gott while he was in Albany attending a county-sponsored legislative conference in January of this year. The Board, in a unanimous vote, resolved to have the County’s contracted labor counsel, Hancock Estabrook LLP, conduct a third-party independent inquiry into the matter. The Board was briefed at their December meeting on the results of this inquiry. The independent team handling the inquiry has deemed the allegations credible. While no policy or laws were broken, the Board of Supervisors has made it clear that any allegations of misconduct will be investigated and that the integrity of
the County’s reputation is always paramount. Chairman Gott, while not admitting guilt, has indicated to his fellow Board members he will not be seeking reappointment to the position of Chairman for the 2018 year. At the County’s January 2nd organizational meeting, the Board of Supervisors will vote on a new leader. Looking forward into the new year, the County will be reviewing its travel and conference attendance policy and the Board itself will be evaluating the merits of a County Board of Supervisors Code of Conduct. 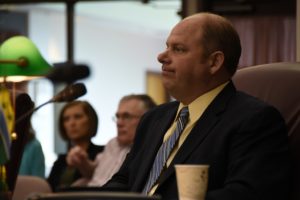