LIVONIA – Town Supervisor Eric Gott says that his decision not to seek reappointment as Chairman of the Livingston County Board of Supervisors means that he can get back to Town and County business.

Gott issued the following statement after news broke that he will not seek reappointment:

I was recently made aware of the results of the county’s investigation. This has certainly been exhausting for me and my family. My first responsibility is to them, my second responsibility is to my constituents. I am grateful that this matter is concluded and I look forward to returning to the business of Livingston County and the Town of Livonia. My term as Chairman of the Board of Supervisors ends on December 31 and I have decided not to seek reappointment to that position. It is my hope that this will avoid any further distractions. I look forward to continuing to serve as Town Supervisor for Livonia. I am beyond grateful for the support I have received from my family, friends and members of this community.

Gott’s statement follows a statement by County Administrator Ian Coyle regarding allegations that Gott made unwelcome sexual comments to a woman at a bar in Albany. Coyle said that a third-party investigation by the County’s contracted labor counsel, Hancock Estabrook LLP, considers the allegations to be credible and that Gott decided not to seek reappointment.

“I’m proud of what we accomplished with Eric as Chairman,” said LeFeber. “I’m open to the Chairman position, but the decision to elect a Chairman is now with my fellow supervisors on the Board.”

The Board of Supervisors signs resolutions and local laws on the county level. It is comprised of the Town Supervisors of all of Livingston County’s towns. 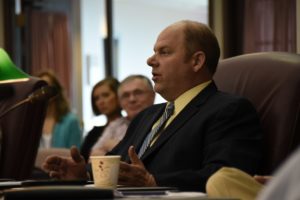 Gott talks on consolidation of public services at a special meeting at the Livingston County building. (File photo/Conrad Baker)