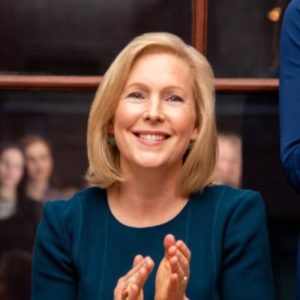 On the Brian Lehrer Show this morning on WNYC Radio, Yvonne Taylor, Vice President of Seneca Lake Guardian, called in and urged Senator Gillibrand to visit the Finger Lakes and meet with the residents and local business owners negatively affected by Greenidge Generation. Greenidge is a fossil fuel-burning peaker plant, owned by a Connecticut-based private equity firm, using its grandfathered-in permits to run as a 24/7 Bitcoin mine.

Taylor asked, “I live in the Finger Lakes, where energy-intensive cryptocurrency mining is wreaking havoc on the climate and our natural resources, all for the sake of 48 jobs that the Greenidge Bitcoin plant provides, compared to 60,000 jobs that our thriving wine and tourism industry supports… my community is wondering why, as a champion for upstate and agriculture, you haven’t answered our requests to visit New Yorkers who are being harmed by cryptomining in the region that you’re pushing to make a national heritage site?”

Gillibrand answered, “I share your concerns about the environmental impact of Bitcoin mining, particularly in upstate New York near the Finger Lakes where that particular mining company is dumping hot water into the Finger Lakes which is going to create an enormous environmental impact. I was the first person to call this out when I visited over a year and a half ago, and I met with the people that were protesting the Greenidge Generation permit. And so, I support the community in trying to push out cryptomining in places like the Finger Lakes, and so I believe that the local community must be heard on this…

I would love to meet with your group… I’d be delighted to sit down with you all and we’ll make sure we plan a trip to the Finger Lakes sooner rather than later.”

Taylor also stressed that any federal legislation on cryptocurrency mining sponsored by Senator Gillibrand must contain a strong climate component.

Listen to their conversation here, starting 20 minutes in.

Last week, Seneca Lake Guardian and nearly 30 other groups sent an open letter to Senators Gillibrand and Schumer urging them to visit the Finger Lakes and meet the residents and business owners whose livelihoods are suffering the environmental and economic consequences of Greenidge.

“New Yorkers elected our senators to advocate for sane policy that is in our best interest, not sit quietly while a Connecticut-based private equity firm destroys our region and sets a dangerous precedent for the rest of the nation all to make a select few very, very rich.

We understand that you both have a positive relationship with Governor Hochul, who has been mostly silent on this issue. We are asking for you both to show her what bold climate leadership looks like by accepting our invitation for a tour and taking a stand on one of the biggest emerging threats to the climate and New York’s energy goals. Meet with the New Yorkers whose livelihoods are suffering because of Greenidge, in the region that Senator Gillibrand pushed to be made a National Heritage Site.”

Both Senators Gillibrand and Schumer previously sent letters to the EPA urging the Agency to oversee the NY Department of Environmental Conservation’s review of Greenidge Generation’s Title V Air Permit renewal application in Fall 2021. They have not publicly engaged in the issue since, and have evaded invitations from Seneca Lake Guardian to tour the region and meet with residents.

The DEC is currently considering Greenidge’s Title V Air Permit renewal application. Researchers at Cornell University recently FOILed for the 4000 public comments sent to the DEC about Greenidge and, using both machine text analysis and manually reading through the comments, determined that 98.8% of the comments were opposed to Greenidge.

In its recent report, the Intergovernmental Panel on Climate Change (IPCC) warned that global warming is nearing dangerous levels if we don’t drastically reduce our dependence on fossil fuels much faster than we are. Meanwhile, New York State is accommodating 20% of the country’s rapidly-growing, fossil fuel-burning cryptomining industry, a direct threat to communities, local economies, and the climate. Expert climate scientists, ecologists, and economists expressed their opposition to Greenidge Generation and proof-of-work cryptomining (which Bitcoin uses) in New York in a press conference last week.

Located on the shores of Seneca Lake, Greenidge is a once-mothballed power plant that has been converted into a bitcoin mine by the private equity firm that owns it. The plant has brought only 48 new jobs to the region compared to the existing $3 billion agritourism economy, employing approximately 60,000 people, while poisoning the Finger Lakes’ natural resources. Greenidge operates over 17,000 Bitcoin mining machines and is expanding to over 32,500, pumping dirty fossil fuels into the air 24/7. This will lead to over 1 million tons of CO2 emissions each year, equal to that of 100,000 homes. Greenidge also sucks up to 139 million gallons of water each day from Seneca Lake and dumps it back in at up to 108 degrees. This risks causing toxic algal blooms, which can be dangerous or fatal to humans and other animals and make this water source for 100,000 people completely unusable.

Recently, on March 31, the DEC punted the deadline to renew or deny Greenidge Generation’s Title V Air Permit to June 30 – two days after the gubernatorial primary. This is the second time DEC has delayed making a decision, after a previous two-month delay and more than a year of advocacy by residents, business owners, scientists, wine makers, environmental activists, and elected officials.

Greenidge Generation is the test case for proof-of-work cryptomining in New York, and advocates warn that a renewal of its air permits would signal to more outside speculators that New York’s fossil fuel power plants, closed as we work toward meeting greenhouse gas emissions reductions goals, are available to be bought up and re-opened as gas guzzling Bitcoin mining cancers on communities.

The DEC has already confirmed that Greenidge is a threat to New York’s energy goals as outlined in the CLCPA. In a recent story, “DEC Commissioner Basil Seggos told WSKG that he continues to have “significant concerns” whether Greenidge Generation’s operations will be compliant with the state’s statutory climate goals under the Climate Leadership and Community Protection Act, or CLCPA.” Seggos later said, “Our belief still stands that this is a facility that’s going to have an uphill battle complying with the law.”

And at a recent Environmental Conservation budget hearing when asked about the potential impact of the escalating cryptocurrency mining activity in upstate NY on the states energy grid, the NYS Energy Research and Development Authority (NYSERDA) President Doreen Harris stated, “There could be a very significant impact on NY load resulting from cryptocurrency mining depending on the penetration of the resource.”

After China banned cryptomining, citing the environmental threats the practice poses to meeting emissions reduction goals, outside speculators have flocked to upstate New York to take advantage of the nonexistent environmental regulations. In addition to fighting against Greenidge’s air permit renewal, advocates, scientists, electeds, and more are urging Governor Hochul to put a moratorium on proof-of-work cryptomining.

The Governor is well within her legal authority to act, according to a new white paper from Columbia Law School Sabin Center for Climate Change Law: A Pause on Proof-Of-Work: The New York State Executive Branch’s Authority to Enact a Moratorium on the Permitting of Consolidated Proof of Work Cryptocurrency Mining Facilities. The paper (summary of findings available here) draws on precedent established in 2010 when the executive branch signed the fracking moratorium. It finds the Governor has authority to stop new proof-of-work cryptomining operations by enacting a moratorium on the permitting of these facilities until a Generic Environmental Impact Statement (GEIS) to determine the full extent of the impacts of mining on communities is complete.

Proof-of-work cryptocurrency mining (which Bitcoin uses) is an extremely energy-intensive process that requires thousands of machines whirring 24/7 to solve complex equations. The more machines that are running, the faster a coin is mined. Each one of these machines requires energy to run, plus more energy to run cooling technology. Globally, proof-of-work Bitcoin mining uses the same amount of energy each year as the entire country of Argentina. It produces 30,700 metric tons of e-waste each year, comparable to the yearly IT equipment waste of the Netherlands. If left unregulated, the industry will wreak irrevocable harm on the entire state of New York, making it impossible to reach New York’s crucial climate goals as outlined in the Climate Leadership and Community Protection Act (CLCPA). The CLCPA commits to an 85% reduction in greenhouse gases by 2050 and 100% zero-emission electricity by 2040.

Powering Bitcoin mining with renewables is not a viable solution, as renewables supply cannot possibly meet the extreme energy demands of Bitcoin mining in addition to daily necessities such as heating and cooling homes and running cars. Any renewable energy that supports Bitcoin mining is renewable energy that is being diverted from the public grid. And when crypto miners rely on the public grid, they stick everyday New Yorkers with the bill. A 2021 study estimates “the power demands of cryptocurrency mining operations in upstate New York push up annual electric bills by about $165 million for small businesses and $79 million for individuals.

Cryptomining is also at odds with the overwhelmingly popular amendment to the state constitution passed last year, which guarantees every New Yorker the right to clean air, clean water, and a healthful environment. Revitalizing old polluting power plants for private financial gain, with drastic consequences for our air, water and climate, all while causing huge amounts of noise pollution, is now unconstitutional – and ought to be treated as such.

Reform groups Common Cause/NY and NYPIRG have specifically criticized the crypto mining industry for exploiting public resources and straining the energy grid for private gain, and a group of federal lawmakers led by Senator Elizabeth Warren recently requested details from six major Bitcoin mining companies about their electricity usage and contributions to climate change. Earlier this month, President Biden issued an executive order requiring federal agencies study the legal, economic, and environmental impacts of cryptocurrencies, including Bitcoin mining. Even the Mayor of New York City, Eric Adams, an avid crypto booster has come out against mining, declaring at a February 9th joint session of the Legislature: “I support cryptocurrency, not crypto mining.”

More than 1,000 organizations, businesses, environmental activists, concerned residents, wine makers, elected officials, and more have taken action over the last year in opposition to crypto mining in New York State. A letter sent to Governor Hochul in October was signed by more than 650 individuals and groups. In letters to Governor Cuomo last year opposing Greenidge Generation’s expansion from an emergency peaker plant to a 24/7 Bitcoin mining operation, organizations, businesses, and Finger Lakes residents demanded Gov. Cuomo revoke Greenidge’s permits due to its massive greenhouse gas emissions, poisoning of the Finger Lakes, and noise pollution, with no economic benefit to the community. Greenidge Generation is still operating in Dresden, NY under grandfathered-in permits granted for use as a peaker plant, not 24/7 Bitcoin mining. Greenidge has applied for an air permit renewal and is awaiting a decision from the Department of Environmental Conservation. Similar fights have occurred in Plattsburgh and Niagara Falls, which resulted in local moratoriums.

The NYS Assembly just passed legislation (A.7389-C Kelles/S.6486-D Parker) with 95/147 votes that will establish a two-year moratorium on new and renewed permits for proof-of-work cryptomining operations housed at fossil fuel-burning power plants. The bill will also require the Department of Environmental Conservation to perform a full environmental impact assessment in a year’s time on cryptomining operations and how they affect New York’s ability to meet the climate goals mandated in the Climate Leadership and Community Protection Act. The bill must now be passed by the Senate before going to Governor Hochul’s desk. Last year, the Senate passed the same bill by a 36-27 margin.