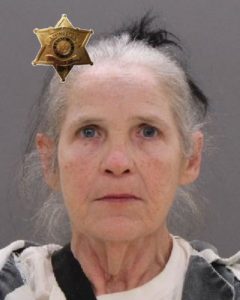 Sheriff Thomas J. Dougherty reports the arrest of a Nunda resident on felony charges following an investigation by the  Sheriff’s Office.

On November 14th, 2021 at about 2:45pm, Deputies responded to a residence on Vermont Street, in the Village of Nunda, for the  report that someone entered the residence unlawfully and stole property while inside.

It is alleged through the investigation that Tammey L. Gibson, age 59 of Nunda, had forcefully entered the residence unlawfully on  November 14th, 2021 and while inside, stole approximately $15.00 worth of loose change.

Sheriff’s Deputies arrested and charged Gibson with felony Burglary in the Second Degree, Petit Larceny and Possession of Burglar’s  Tools.

Gibson was transported and turned over to Central Booking Deputies at the Livingston County Jail for processing and pre-arraignment  detention. The District Attorney’s Office was contacted in regards to bail due to the felony level charges. It was recommended that  bail be set at $2,500 cash or $5,000 bond.

Assisting on scene with the investigation for the Sheriff’s Office was Deputy Brad Little, Deputy Laszlo Babocsi and Sergeant Caleb  Cutting. The incident was handled under the command leadership of Acting-Sergeant Michael Donals.