GENESEO – The Village’s notorious if beautiful free-ranging cats will be the focus of a committee of local residents.

Village Trustee Mary Rutigliano is spearheading the committee, which will discuss ways to humanely slow the cats’ population growth.

“Growing up on Livingston Street, I’d see cat litters getting under porches and in hollow trees,” said Rutigliano. “There are concerns but we’re not going to play the blame game. This will be a solution-based conversation.”

There are concerns that the dense population of cats may threaten the health of human residents or pets. They can get into garbage, and birdwatchers know how their hunting abilities make them a serious threat to native songbirds.

The committee may decide to make recommendations to local residents about how to handle the cats. There may be action taken to lower the cat population as humanely as possible.

“We can talk about whether or not it’s a good idea to feed cats,” said Rutigliano. “Some people say that they feed cats because otherwise they’ll get into the garbage. We’ll look at what has been done in the past. I know on Oak Street there was once an initiative to gather, neuter or spay and release cats. We might mobilize a team to do that.”

Perhaps more importantly, Rutigliano said, is public education about what pet owners should to do or not do. A dominant theory is that college students who are about to move or graduate release their cats at barns in the Town of Geneseo.

“To the College’s credit they do a lot of education on pet ownership,” said Rutigliano. “I remember during my orientation they definitely sent the message that first of all, pets are not allowed in dorms, and second if you have a friend who has a pet off campus, they have a responsibility to that pet and this community.”

The next step will be announcing a date for anyone interested to gather and form the committee.

“That date will be forthcoming,” said Rutigliano. 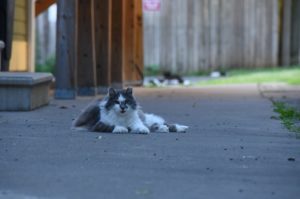